It should be noted that the number of samples for each site and parameter varies because sampling was started in different years for each site and there are some missing results. The trend analysis was done on data from October 1996 to June 2010 for all sites where this data was available (including the national network sites). However, for sites that were added to the network later that October 1996, the trend analysis included data from when sampling began at these sites.

The results from the formal trend analysis have been summarised into the maps below in the following way:

· Meaningful increase or decrease (P £0.05) and the magnitude of the trend is greater than 1% per annum of the raw data median

Three sites had significant trends for temperature, all of which were a meaningful and decreasing trend. At this stage, these trends for all sites (Awanui River at Waihue channel, Mangere River and Victoria River) are seen as improvements. These trends are consistent with trends reported by Larned et al (2004) which found that there were positive decreasing trends in temperature at a national scale. There were ten sites with significant trends for dissolved oxygen, nine of which were meaningful. Decreasing trends were observed in the Awanui, Kaihu, Mangakahia (Titoki Bridge) and Waipoua Rivers, all of which are deteriorating trends as dissolved oxygen levels are often below the recommended guideline range. Ballantine and Davies-Colley (2009) also recorded a significant decreasing trend at Mangakahia at Titoki Bridge.

Five sites had increasing trends in dissolved oxygen. Two of these sites (Mangere River and Waitangi River at Watea) had an improving trend as levels are often below the guideline range. Ballantine and Davies-Colley (2009) did not find any significant increasing trends in dissolved oxygen (%) at any other the four Northland National River Water Quality Network (NRWQN) sites. The time period used for the analysis of the data may explain the different results These trends are all likely to be deterioration in water quality at these sites as conductivity is generally used as an indicator of water pollution. However, as conductivity is increasing in both pastoral (Awanui, Mangahahuru (Apotu Rd) and Wairua Rivers) and native/plantation forest classes (Mangakahia (Twin Bridges), Opouteke and Waipapa Rivers) it indicates that intensification may not be the major cause of this trend. Temporal changes in air temperature and precipitation may have influenced these trends (Larned et al, 2004). Fourteen sites showed significant changes in pH, of which all were meaningful trends. The Waipoua River was the only site to have a decreasing trend which is seen as a positive trend as the median pH is 7.35 for the 2009/2010 year which is slightly alkaline. Five of the 13 increasing trends are regarded as a negative trend as the pH is often falling above the guideline range (becoming more alkaline). Other New Zealand studies have typically found decreasing trends in pH (Vant and Smith, 2004. Scarsbrook, 2006).

Improvements were seen in the Mangahahuru, Mangere, Victoria, Waiarohia, Waipapa and Whakapara catchments (all increasing pH trends). Factors such as geology, climatic conditions and changes in nutrient levels can all affect the pH of water. It is likely that improvements seen in the highly modified catchments (Mangahahuru, Mangere and Whakapara Rivers) are linked to decreases in nutrient concentrations (see trends table on pg 16). 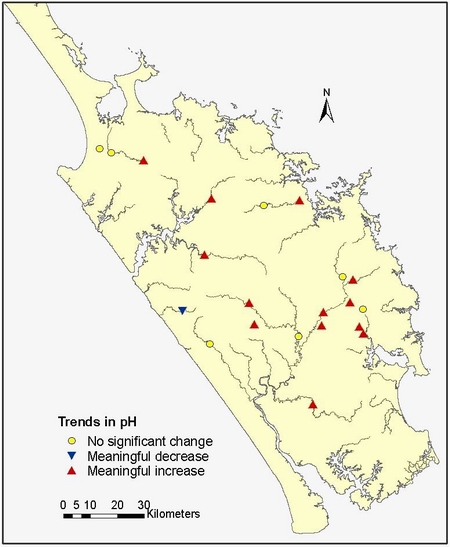 Significant turbidity trends were observed in six of the 21 sites. The only negative trend was seen in the Mangahahuru Stream at Main Rd which has increase in turbidity at a rate of 0.43 NTU per year. The Victoria River also had an increasing turbidity trend however more than 15% of the samples were below the detection limit therefore the trend is not valid. Positive decreasing trends were seen in the Mangere, Waiarohia and Waipapa catchments. Corresponding increases in water clarity were also observed at these sites which indicates that there has been a reduction in suspended sediments entering the streams. Eight of the 21 sites had significant changes in water clarity, of which only one site, Victoria River, had a decreasing trend. The rest had positive increasing trends in water clarity. There are correlating trends in turbidity at four of these sites (Mangahahuru at Apotu Rd, Mangere and both Waiarohia sites). Ballantine and Davies-Colley (2009) and Larned et al (2004) found a positive trend in clarity at a national scale. However, Ballantine and Davies-Colley (2009) also found a decreasing trend at three of the four Northland NRWQN sites which is inconsistent with our findings. A difference in the time period used for data analysis explains the different results in water clarity trends. Only one site, Opouteke River, had a significant trend in E. coli. It is only a small increase of 12 MPN/100ml/year and the median of 160 is well below the recreational guideline of 550 E. coli/100ml. The cause of this increase is unknown at this stage. Faecal source tracking investigations are being carried out to look at the potential source of bacteria in this catchment. Seven sites had significant trends in nitrate/nitrite nitrogen. Only one site, Waiarohia Stream at Whau Valley, had a significant but not meaningful increasing trend. The trend for Opouteke River is deemed invalid as more than 15% of samples were below the detection limit. Decreasing trends were observed in the Mangakahia (Titoki site), Mangere, Waipapa, Wairua and Whakapara catchments. An overall decreasing trend for oxidised nitrogen for the Northland region was also reported by Ballantine et al (2010). As the majority of these sites are situated in pastoral catchments, improvements such as riparian fencing and reducing point source discharges are the likely reason for these decreases in nitrogen concentrations. Thirteen of the 21 sites had changes in dissolved reactive phosphorus concentrations. Mangakahia River at Titoki was the only site observed with an increasing trend. The trend result for the Opouteke River is ignored as more than 15% of the samples are below the detection limit.

Ballantine and Davies-Colley (2009) found that there were meaningful increases in dissolved reactive phosphorus at 22 national river water quality sites, three of those sites were Northland sites (Mangakahia River at Titoki, Waitangi River at Watea and Wairua River). Difference in results may be due to the different time periods used when calculating the trends. 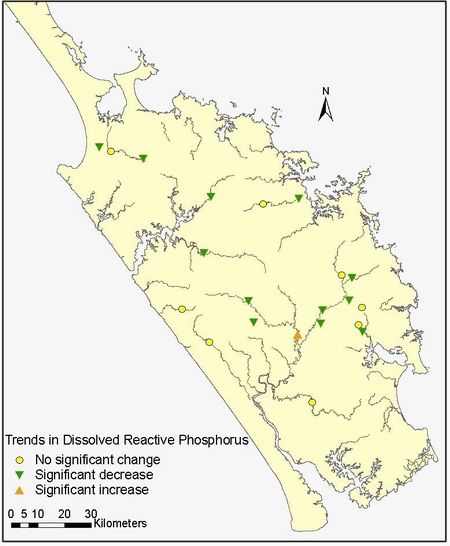 Thirteen river network sites had significant decreases in total phosphorus levels. None of these trends were observed to be meaningful. All but three sites, Manganui, Wairua and Waiarohia at Whau Valley, have corresponding decreases in dissolved reactive phosphorus. Two of ten sites are part of the NRWQN; Waipapa River and Waitangi River at Watea. Ballantine and Davies-Colley (2009) found that there was an increasing trend in total phosphorus at three of the four NRWQN sites in Northland. Differences in results are due to the difference in time period used for the data analysis.

Previous trend results showed an increasing trend in dissolved reactive phosphorus and total phosphorus in the Waipoua River (NRC, 2007). Current results show that there is no significant trend for either parameter indicating that there have been changes in the Waipoua catchment. As this catchment is predominately native; increased concentrations of phosphorus in the past is likely to have come from erosion in the catchment during rainfall events.