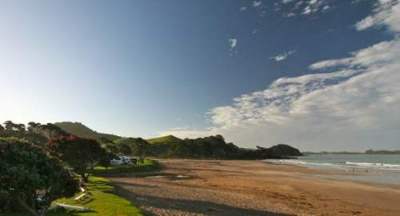 Northland, with its proximity to the sea, almost subtropical location and low elevation has a mild, humid and rather windy climate. Most of Northland lies between latitudes 34°S and 37°S. Summers tend to be warm and humid while winters are typically mild with many parts of the region having only a few light frosts each year. The prevailing wind for most parts of the region is from the south-west however in summer tropical cyclones give rise to north-easterly winds and heavy rainfall.

The dominant airflow over Northland is from the southwest in all seasons as shown in the wind rose map for Northland (Figure 25). In summer and early autumn, when the subtropical high pressure belt shifts south, Northland tends to experience more northerlies and easterlies.

Due to Northland's coastal setting, winds tend to be moderate to strong, particularly in spring, which is generally the windiest season. Exposed coastal areas, particularly those on the west coast and Cape Rēinga, tend to be very gusty and have among the highest wind speeds in New Zealand. Wind direction has important implications for rainfall in Northland.

Northland's annual rainfall is generally plentiful due to its maritime setting, which ensures that the winds arriving have had the opportunity to become moisture laden. The topographical variation across Northland causes rainfall distribution patterns to vary considerably over a small area.

The Tutāmoe and Waimā ranges on the west coast of Northland are the highest points in Northland reaching an altitude of only 770 and 781 metres respectively. Mean annual rainfall ranges from 900mm in low-lying coastal areas to over 2900mm in higher altitudes (Figure 26). 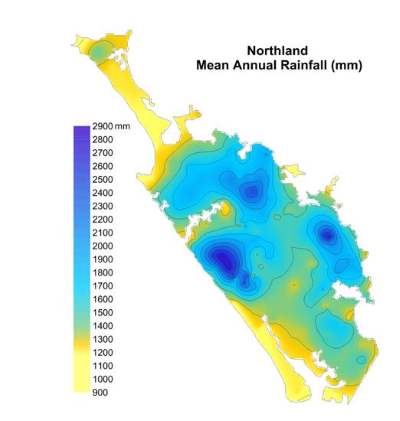 Due to seasonal movements in high pressure belts, seasonal influences on rainfall are well defined. Rainfall is highest in winter (approximately one-third of the yearly rainfall amounts fall in the winter months of June, July and August), and lowest in summer. However, Northland experiences high intensity rainfall associated with the passage of tropical or sub-tropical storms which pass over the region between November and April. 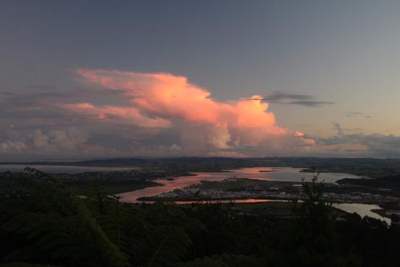 Droughts are also common in Northland during the summer months. High pressure weather conditions are prevalent during this period, often resulting in several weeks or months of dry and hot or windy weather. Records indicate that parts of the region on average have a drought of economic significance every three years.

Northland lies just south of the subtropical high pressure belt. It is also influenced by the strong westerlies of the westerly wind belt and associated low pressure systems, which generally lie south of Northland.

During the summer months, the subtropical anticyclone highs tend to move south to cover the North Island producing a warmer, more settled climate. In winter, anticyclonic systems have a more northerly track and Northland is exposed to the prevailing south-westerlies and frequent depressions that the rest of New Zealand experiences.

While Northland's location in relation to the subtropical anticyclone and westerly wind belt determines the general nature of the climate, its topography also has an effect on the variation of climate and wind flow within the region.

Northland's weather is largely controlled by the continuous procession of anticyclones, troughs and associated fronts. Extended periods of fine weather occurs when an anticyclone is centred in the South Tasman Sea between southeast Australia and New Zealand, which moves slowly onto New Zealand with a ridge of high pressure extending northwards over Northland.

Anticyclonic blocking occurs when a high pressure system becomes stationary over a region causing low pressure systems to be steered well south, slowing them down or completely blocking the westerly movement of the depression.

Northland is also affected by weather systems of tropical origins. Modified tropical cyclonic depressions from the north may affect Northland on average once every five years, particularly in the months from November to April. These bring gale force north to north easterly winds and heavy rain. Droughts are sometimes broken by heavy downpours associated with these depressions. 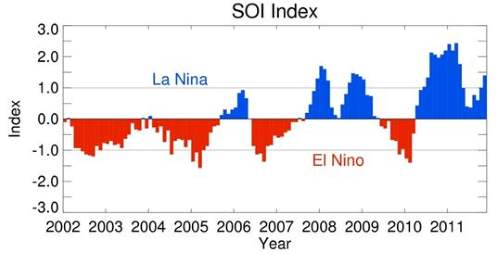 El Niño and La Niña refer to weather patterns that occur periodically across the Pacific Ocean. They are both characterised by variable levels of winds and rainfall in different parts of New Zealand.

In El Niño years, New Zealand tends to experience stronger or more frequent winds from the west in summer, leading to drought in east coast areas and more rain in the west. In Northland, this usually leads to slightly cooler than usual temperatures and significantly lower rainfall than normal in eastern areas. In winter, the winds tend to be more from the south, bringing colder conditions to both the land and the surrounding ocean.

La Niña events, which occur at the opposite extreme of the Southern Oscillation Index cycle, have weaker impacts on New Zealand's climate. New Zealand tends to experience more northeasterly winds, which bring moister, rainy conditions to the northeast parts of the North Island, and reduced rainfall to the south and south-west of the South Island.

Although El Niño has an important influence on New Zealand's climate, it accounts for less than 25 percent of the year to year variance in seasonal rainfall and temperature at most New Zealand measurement sites. East coast droughts may be common during El Niño years, but they can also happen in non-El Niño years.

Serious east coast droughts do not occur in every El Niño, and the districts where droughts occur can vary from one El Niño to another (although some are more consistently affected than others). However, the probabilities of the climate variations discussed above happening in association with El Niño are sufficient to warrant management actions and planning to be taken when an El Niño episode is expected or in progress (NIWA Science Centre: web retrieval).

The graph (Figure 27) illustrates the monthly running mean of the Southern Isolation Index (a measure of the changes in atmospheric pressure across the Pacific) from December 2001/February 2002 to November 2011/ January 2012. Above an index of +1.0 is considered to be a strong La Niña influence and below -1.0 is a considered strong El Niño influence.

The graph shows a sustained El Niño influence during the period 2002 to 2007 and a dominant La Niña influence from 2007 to 2011, however during 2009 and 2010 a strong El Niño climate pattern is evident resulting in extreme drought conditions for Northland over a significant duration. 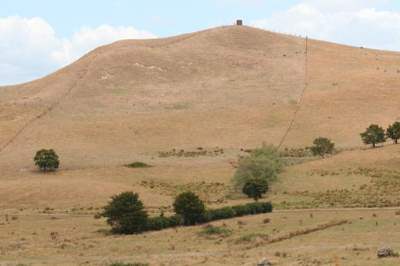 Ministry of Transport, NZ Meteorological Service. R.W. Moir, B. Collen, and C.S. Thompson (1986). The Climate and Weather of Northland.