The following regional policy documents are used to guide transport management and infrastructure development in Northland:

The Regional Policy Statement (RPS) for Northland' (NRC 2002) objective relating to transport is to maintain and enhance the safety and efficiency of the region's transport networks, while minimising adverse environmental effects.

The purpose of the Regional Land Transport Strategy (RLTS) is to provide a planning framework for the development of land transport in the region for the next 10 years and the vision is "Northland has an integrated, equitable, responsive, safe and sustainable land transport system".

The Regional Passenger Transport Plan (NRC 2005) was produced in September 2003 and reviewed in May 2005, and is incorporated as part of the RLTS. The purpose of the Regional Passenger Transport Plan (RPTP) is to set out objectives and policies for public transport services in the region and to specify the services that are considered necessary. From there local funding issues and constraints can be worked through in order to source financial assistance from Land Transport NZ.

In late 2006, the Regional Council completed a regional capability review of infrastructure in Northland in order to identify gaps or constraints to regional growth and to prioritise the need for further infrastructure development. One of the six top priorities identified is the establishment of a rail link to the Marsden Point area (Oakleigh to Marsden Point Rail Link Project), in an attempt to move more heavy freight by rail.

It is recognised there is additional capacity within the rail network to accommodate increased freight movement by rail. Where appropriate, rail freight can provide a more fuel efficient and environmentally sustainable alternative to road based freight transport. However, rail tunnels would need to be enlarged in order to accommodate new "High Cube" containers which are increasingly being used. 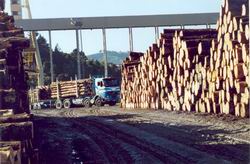 This rail link is vital given the contributions the developing Bream Bay area makes to Northland's economy through its port and other businesses. A feasibility study completed in 2003 for the Regional and Whangarei District Councils found that developing the link would offer a host of benefits, including helping to ease forestry-related traffic volume and congestion problems on the region's roads. The study also found development of the rail link could create the equivalent of more than 200 fulltime jobs during the construction period and inject millions into the local economy. It could also help attract other big businesses to the Marsden Point area.

The first stage in this project is the designation of the land needed for the rail link corridor. Designating the route means that the land will be available in the future when the funding is identified to build the railway. If this is not done, it means that a subdivision or other development may take place in the meantime on the land that makes up the preferred route.

The Northland Regional Council recognises and monitors the adverse environmental effects created by both the transport infrastructure and the modes of transport utilised through its Regional Land Transport Strategy.

Section 175(e) of the Land Transport Act 1998, which sets the guidelines for the compilation, states that the Regional Land Transport Strategy must avoid, to the extent reasonable in the circumstances, adverse effects on the environment.

Number of vehicles and average age registered in Northland

Number of locations where noise and vibration are an issue

Noise generated by land transport modes is generally the most significant man-made source of noise in the region. On the open road the engine and exhaust system are the most prevalent sources of vehicle noise. In the urban environment deceleration, braking and acceleration become a significant source of noise. Other noise arises from the interaction between tyres and the road surface, and from different types of loads (e.g. stock crates).

Number of locations where landscape, natural, historical and cultural value and ecosystems are being actively managed

Provision for the protection of landscape, scenic, historical, environmental and cultural values is incorporated into the planning and implementation of major roading projects every year. This is carried out through the Regional and District Council resource consent process.

Increase in freight transported by rail

As discussed above there has been a decrease in the amount of freight transported by rail with the recent closure of Port Whangarei and the use of the new Marsden Point Port. This could change in the future with the proposed rail link to Marsden Point.

There are currently 62 sites throughout Northland (MFE 2007).

The WDC is currently constructing a stock truck effluent dumping site on Rewarewa Road, Whangarei, near SH1. This should be completed in 2007/2008. Potential sites in Kaipara and Far North Districts are still being investigated.

Reduction in weeds and litter on roadside

Litter removal is a component of Transit's State Highway maintenance contract. However, household rubbish dumped at stock-pile sites and rest areas is an increasing problem for which Transit seeks assistance from the district councils. Weed removal is ongoing with mowing/spraying and clearing contractors now operating wider edge coverage along the road corridor.

Total mobility is a nation-wide scheme aimed at assisting people with impairments to become more mobile and active in the community. There is currently a scheme operating in Whangarei and investigations underway to expand the scheme to other areas. Every year there are approximately 30,000 passenger trips in Whangarei under the Total Mobility Scheme (NRC 2006).