13.2 What are the pressures on geothermal resources? Historically, the thermal waters at Ngawha Springs were used for bathing. Maori history tells of the waters being used for bathing warriors. The spring system also attracted considerable scientific and commercial interest in the late 19th and early 20th centuries because of the accompanying mercury deposits, which were unprofitably mined during two periods. These mining operations substantially modified the landscape surrounding Ngawha springs (Sheppard and Johnston 1984).

Currently, the springs are still used for bathing. Baths have been excavated since 1908 in four separate areas. They have boarded sides and are fed through seepage in the bottom and/or sides. The bath waters have a small international and a large local reputation for their curative properties.

Since July 1998, fluid from the Ngawha geothermal field has also been used for power generation. The field is "tapped" by a single power station, which was constructed by a joint venture between Top Energy and the Tai Tokerau Maori Trust Board, the Ngawha Geothermal Resource Company Ltd (NGRC).

The 1994 consent allowed up to 10,000 tonnes of geothermal fluid per day to be taken from two "production wells", which is used to generate around 11 MW (gross) of electricity. The used fluid is then returned to the ground via two "re-injection wells". 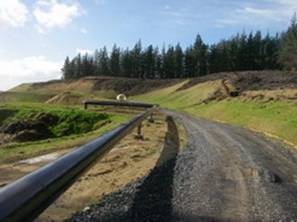 The abstraction of geothermal fluid has the potential to result in physical and chemical changes to the existing geothermal features in the Ngawha Basin. Discharges from the geothermal power station also have the potential to have adverse effects on air quality and terrestrial and aquatic ecosystems.