Coastal areas have been undergoing rapid development in recent years and the One Tree Point area adjacent to Whangarei Harbour is no exception. Figure 9: Location of the One Tree Point area outlined in red.

Unfortunately, these soils are prone to wind erosion and care must be taken during earthworks to ensure that adequate precautions are in place to prevent strong winds from causing dust nuisance problems for adjoining residents. The prevailing winds in the area are generally south-westerly which means that any residential properties to the north-east of large earthworks developments could potentially be affected by dust.

Such large earthworks for developments usually require resource consents and a normal condition is a requirement not to cause "offensive or objectionable" dust at or beyond the boundary of the development.

Digger generating dust, while excavating trees in the One Tree Point area.

After a few weeks the council received additional complaints and site visits confirmed that again dust from the earthworks was resulting in dust nuisance for adjoining residents. The company was requested to cease operating unless they could ensure that any dust from the development was not offensive or objectionable at or beyond the property boundary. The developers were advised that failure to address the dust nuisance could result in formal enforcement action.

On 14 November 2005 another complaint was received regarding dust nuisance. Wind measurements and dust assessments were made by the council officer inspecting the site, who concluded that the dust nuisance was "offensive and objectionable beyond the boundary of the property". The officer observed members of the public turn back after attempting to use the footpath barely visible on the right hand side of the photograph below. Vehicles were also observed driving slowly through the dust with their lights on. 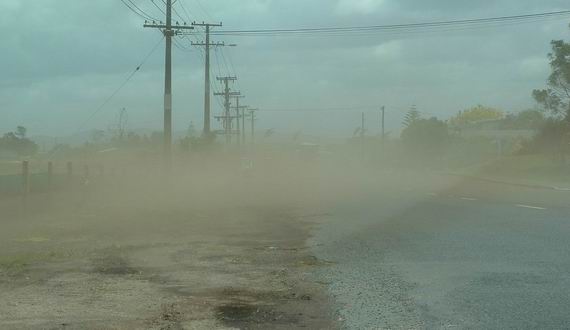 Dust originating from the earthworks (on left of photograph) being blown across the road towards residential properties on the right.

Given the failure of the company concerned to comply with the previous warnings issued by the Regional Council, a decision was made to prosecute the company responsible for the dust discharges.

The earthworks contractors pleaded guilty to causing a dust nuisance and were convicted and fined $22,000 in the Environment Court.

Following the conviction, there has been a distinct improvement. Developers and contractors undertaking earthworks in the One Tree Point area are now careful to ensure that comprehensive dust management plans are in place prior to commencing earthworks.