3.3 What is the state of air quality?

Clear, clean air is essential for the health and well-being of the Northland community. While poor air quality impacts on health, it also affects agricultural, horticultural and tourism industries.

The resource consent process addresses major point source discharges from industrial processes but non-point source discharges from motor vehicles or domestic fires can also collectively impact on air quality. By monitoring these pollutants in ambient air, it is possible to determine long-term trends. These trends can give advance warning of possible problems and enable effective strategies to be developed to prevent any deterioration of air quality.

NRC monitors certain air pollutants to find out the quality of the air we breathe. Air quality monitoring in the Northland region shows that there are some areas with poor air quality at times, especially during winter months. In winter there are periods of cold, calm weather when pollutants can build up to levels that may affect human health.

Air quality monitoring to date has shown that Whangarei City is the most likely area to have air pollution episodes during winter. Air quality around busy roads, especially those subject to traffic congestion can be degraded by pollutants emitted from motor vehicles. NRC also has ongoing programmes to carry out air quality monitoring in places suspected of having occasional degraded air quality.

The following parameters are monitored on a regular basis in Northland and a summary of recent results are presented below: Particulate matter (PM10), carbon monoxide (CO) and sulphur dioxide (SO2). 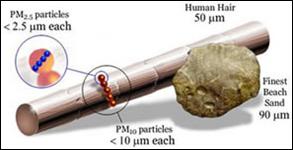 Particulate matter is a collective term used to describe very small solid or liquid particles such as dust, fume, smoke and mist or fog. Particulate material, which has an aerodynamic diameter of less than 10 microns, is referred to as ‘PM10'.

PM10 are small enough to be inhaled. Fine particulate matter especially PM2.5 (<2.5 µm diameter in size) can even reach up to the human lungs and aggravate respiratory disorders. Research has shown that fine particles are more responsible for specific health effects. People most susceptible to the effects of particles include the elderly; those with existing respiratory disease such as asthma, chronic obstructive pulmonary disease and bronchitis; those with cardiovascular disease; those with infections such as pneumonia; and children.

The NES set by the Ministry for the Environment for PM10 in order to protect human health is 50 mg/m3 averaged over a 24 hour period (MFE 2004). PM10 is monitored in Whangarei City using two devices. The first is a High-volume sampler operated at Water Street in Whangarei once every six days. The results from this sampler are shown in figure 5 (below). More recently, a second instrument, a Beta-Attenuation Monitor (BAM), has been deployed at Robert Street in Whangarei. Unlike the High-volume sampler the BAM samples the air continuously and allows variations over as little as 10 minutes to be detected. The higher resolution and continuous record allows Council staff to determine the likely source and extent of different contributions to the Whangarei air shed.

Results from the BAM sampler shown in figure 6 (below) indicate elevated concentrations typically occur during winter and that the NES was exceeded once during 2006. Carbon monoxide is a colourless, odourless gas that can be hazardous to humans. It is readily absorbed from the lungs into the bloodstream where, because of the stronger affinity haemoglobin has for carbon monoxide, it reduces the oxygen-carrying capacity of the blood.

Carbon monoxide is a trace constituent of the atmosphere, produced by both natural and human activities. Such human activities include vehicle use and domestic burning (where incomplete combustion takes place). Places where vehicle emissions accumulate such as traffic jams, tunnels and carparks are locations of potentially high exposure levels. Office buildings and shops located along congested motorways or below carparks can also accumulate carbon monoxide. 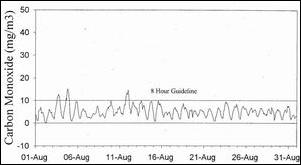 The results from one month of carbon monoxide monitoring (August 1996) at Bank Street, Whangarei are shown in figure 7 (right).

Sulphur dioxide (SO2) is a colourless gas that readily reacts with ambient moisture to generate sulphuric acid aerosols (H2SO4). This transformation is the major contributor to "acid rain". 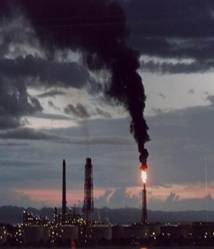 Sulphur dioxide is produced during the combustion of fossil fuels, especially coal and oil, due to the oxidation of small quantities of sulphur compounds present within the fuel. In Northland, the major sources of sulphur dioxide are from industries that use feed stocks with substantial quantities of sulphur. These include Marsden Point refinery or other industries that oxidise sulphur as part of their production process such as the Ballance Agri-Nutrients manufacturing plant.

The results from approximately three years of monitoring at three sites (Whangarei Heads School, Little Munro Bay and Urquharts Bay) are shown in figure 8 (below). The results demonstrate that peak concentrations at the three sites remain below the NZ ambient air quality guideline (MFE 2002) of 120 micrograms per cubic metre.

Northland Regional Council monitors around 310 resource consents which have permits to discharge into the air. Many of these consents are for small-scale sewage treatment and disposal facilities which need appropriate controls placed on air emissions to prevent odour problems from arising.

Approximately 90 discharge to air consents are closely monitored by the NRC to ensure that there are no significant adverse effects arising from the exercise of these consents.