The state of a lake can be determined by using the Trophic Level Index (TLI). The TLI uses four key variables, chlorophyll α (indicator of algal biomass), water clarity (secchi disc depth), total nitrogen and total phosphorus, which together are an indication of a lake's overall health. Table 1 (below) shows the values that define the different trophic levels (Burns et al. 2000).

Table 1: Values of variables that define the boundaries of different trophic levels.

Established in 2005 the Northland Lake Water Quality Monitoring Network (LWQMN) includes 31 lakes throughout Northland, which are sampled every three months.

Between November 2005 and March 2007, 16 dune lakes on Aupouri Peninsula were monitored as part of the LWQMN. From these results nine lakes were classed as mesotrophic, one oligotrophic and the remaining eutrophic or worse, as shown in figure 1 (below).

Mesotrophic lakes have high to moderate water clarity and have low to no algae present. Approximately half of the lakes classed as mesotrophic are situated in catchments dominated by exotic forestry with the rest situated in farm land. Lakes in catchments dominated by farm land are more at risk of becoming eutrophic unless measures are put in place to prevent nutrients from entering the lake. 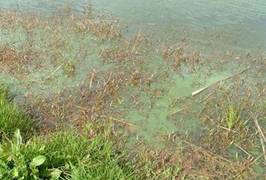 Lake Te Kahika is the only one classed as oligotrophic, of the 16 regularly monitored Aupouri lakes. Oligotrophic lakes have excellent water clarity and low concentrations of nutrients and algal biomass.

Only one lake on the Karikari Peninsula is part of the LWQMN, Lake Waiporohita. It is hypertrophic, as shown in figure 1 (below), with high levels of nutrients and low clarity, due to the peat stained water. Algal blooms often occur in this lake during summer. Figure 1: Map of the Aupouri and Karikari Peninsulas showing the trophic status of 17 monitored lakes.

Lake Omapere is Northland's largest lake at approximately 1200 hectares. It is a volcanic lake situated north of Kaikohe, which was formed when a lava flow blocked water flowing eastwards. Lake Omapere is an important taonga to the hapu and iwi of Ngapuhi and has important amenity value to the wider Kaikohe community.

Lake Omapere has a more intensive monitoring programme than the 31 lakes in the LWQMN. It has been sampled at least every second month for more than 10 years. It has shifted from a weed-dominated lake to its current state as a turbid algal-dominated lake.

Water clarity is poor and nutrient levels are high, which means this lake is classed as hypertrophic, as shown in figure 2 (below). Lake Omapere often has blue-green algal blooms in the summer making it unsafe for human and stock use. Figure 2: Map of the central and west coast area showing the trophic status of 15 monitored lakes.

All the Kai Iwi lakes stratify over the spring/summer period with bottom waters always becoming deoxygenated in Lake Waikere and sometimes in Lake Taharoa. This can trigger the release of nutrients from the bottom sediment causing an increase in nutrients in the water column. All of the Kai Iwi lakes are surrounded by exotic forestry with a fringe of native scrub.

Water quality sampling was undertaken at 11 lakes on the Pouto Peninsula between 2005 and 2007. Results show that there are only three mesotrophic lakes in Pouto: Humuhumu, Mokeno and Rotokawau, as shown in figure 2 (above). The rest of the lakes are eutrophic or worse and often have high algal abundance over summer when the water is warmer. Most of the eutrophic lakes are located in catchments dominated by pastoral farming, often where stock have direct access to the lake. 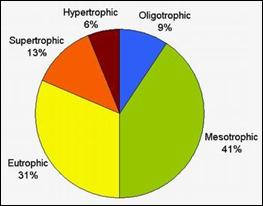 Between November 2005 and March 2007, 32 lakes have been regularly monitored for water quality. Trophic Level Index scores were generated for all the lakes sampled, as shown in table 2 (Appendix A).

Based on these results half of these lakes are eutrophic or worse as shown in figure 3 (right). This means that these lakes have an oversupply of nutrients, poor clarity, low oxygen and toxic algae blooms can often occur. Two lakes are classed as oligotrophic and 41% of lakes are mesotrophic.

Figure 3: Trophic level of 32 Northland lakes for results from Nov 05 to Mar 07.

A further 23 lakes throughout Northland have been sampled intermittently over the last five years. Although most of these lakes have only been sampled one or two times, an estimation of their trophic status can still be calculated, as shown in table 3 (Appendix A).

Most of these 23 lakes are dune lakes. The exceptions are two man-made water supply reservoirs near Kerikeri: Lakes Manuwai and Waingaro, Lake Owhareiti, a volcanic lake and Jacks Lake, which has been artificially dammed (both in central Northland) and Lake Waro, near Whangarei, which is man-made.

Of these 23 lakes, four have an estimated tropic status of oligotrophic and three of mesotrophic and the remaining 16 are eutrophic or worse, as shown in figure 4 (below).

The two small Ngawha geothermal lakes, Ngamokaikai and Waiparaheka were first monitored in October 1998. They were monitored for a second time in April 2006, which shows that the lakes are still acidic with a pH range of 3.5 – 3.7. Both lakes are unique environments and are home to equally unique flora and fauna.

In March 2000, the Council assisted a student from the University of Auckland to carry out a bathymetric survey of the Ngawha geothermal lakes. The main lake (Waiparaheka) was found to have a maximum depth of 40 metres, making it one of the deepest (if not the deepest) lakes in Northland.

For more information on Northland's geothermal resources check out the geothermal section of this report. The Northland Regional Council first monitored the Kai Iwi lakes in 1990; and intermittently between 1990 and 2001. In 2002, an intensive monitoring programme was established for a year by Dargaville High School. Sampling was undertaken almost monthly creating a good data set which can be used to identify trends. Since 2002, sampling has been carried out on average four times a year.

The TLI for the Kai Iwi lakes over the last five years shows there has been little change in all lakes as shown in figure 5 (below). The TLI for Lake Taharoa in 2004 appears lower than the other four years, although only two samples were taken in 2004. Lake Waikere had a higher TLI score in 2005 compared to other years. This higher trophic level was due to high nutrient readings from prolonged stratification and/or fertiliser use on neighbouring land. Assessments of the ecological value of a lake can be made based on representativeness of biota, intactness of vegetation, presence of significant species, absence of pest species, and absence of detrimental impacts such as nutrient enrichment. Between 2004 and 2007, National Institute of Water and Atmospheric Research (NIWA) staff have surveyed 72 lakes and ranked them based on these assessments. The rankings from best to worst are; outstanding, high, moderate to high, moderate, low to moderate and low. The results for the 72 lakes are presented in tables 2 and 3 in Appendix A.

Ranking lakes based on their ecological value helps with prioritising lakes for protection, enhancement and monitoring frequency. For example most of the lakes ranked outstanding are surveyed annually as part of the Pest Plant Surveillance Programme. LakeSPI which is used to assess the ecological condition of a lake is also carried out regularly to assess any changes. No monitoring is carried out on lakes that have a low ranking (except Lake Omapere which has its own monitoring programme).

Outstanding lakes are nationally important, containing a diverse indigenous biota with sustainable populations of endangered species. Fifteen of the 72 lakes surveyed were ranked as outstanding as shown in figure 6 (below). They were found in all four areas but predominantly on the Aupouri Peninsula. Examples of Northland lakes that are ranked as outstanding include Ngatu, Wahakari (both Aupouri), Taharoa (Kai Iwi), Mokeno (Pouto) and Te Riu (Waipoua).

Of the 72 lakes surveyed 13 were ranked as high, eight as high to moderate, and 26 lakes were ranked as low. Lakes ranked with low ecological value are either de-vegetated with poor water quality or severely impacted by exotic pests (including fish and plants). The LakeSPI index score is a measure of how close a water body is to its potential un-impacted state i.e. the closer the LakeSPI score is to 100% the less impacted or more pristine a lake is. This index allows us to detect changes in the lake condition over time and to make comparisons between lakes.

LakeSPI assesses the composition of native and introduced plants growing in a lake and the depth to which they grow. The LakeSPI method is carried out by qualified divers at five sites around the lake. The LakeSPI percentage scores for the 40 lakes surveyed are presented in tables 2 and 3 in Appendix A.

Figure 7: Ecological condition (LakeSPI ranking) of 40 lakes based on the 2007 LakeSPI scores.

Very few lakes in Northland are near pristine as most lakes contain at least one submerged weed species. Examples of lakes that are classed as excellent include Lake Te Paki (Aupouri), Te Riu (Waipoua) and Mokeno (Pouto). These lakes are not impacted by pest plants as they are very isolated with difficult access. A high proportion of lakes are classed as high, having a good native plant community with the odd patch of aquatic weeds. These lakes have reasonably easy access which increases the likelihood of pest plants being introduced. Examples include Lakes Ngatu (Aupouri), Taharoa (Kai Iwi), Humuhumu and Kanono (Pouto).

Bladderwort (Utricularia gibba) is the most widespread aquatic weed species in Northland recorded in 23 lakes in 2007 as shown in figure 8 (below). Prior to 2004, bladderwort was only found in Lake Omapere where it has probably been eradicated through the introduction of grass carp.

It has been found in isolated lakes such as Te Paki Dune Lake and Lake Morehurehu, indicating that dispersal could be through natural agents such as water birds. The majority of lakes with bladderwort are on the Aupouri peninsula.

Hornwort (Ceratophyllum demersum) is currently the worst submerged weed in New Zealand as it can grow from the water's edge to depths greater than 15 metres and can displace all submerged vegetation including other weed species. Hornwort is found in seven Northland lakes, most of which are on the Aupouri Peninsula.

Oxygen weed (Egeria densa) is a major threat to shallow eutrophic water bodies where it can grow over the entire water body, eventually collapsing and switching the lake from a macrophyte-dominated to an algal-dominated lake. Oxygen weed is found in 11 Northland lakes.

Lagarosiphon major is only found in two lakes on the Aupouri Peninsula and one lake on the Pouto Peninsula. L. major is of concern as it can successfully grow in oligotrophic waters and can tolerate wave action. Figure 8: Number of lakes with four invasive weed species recorded in them in 2007.

The rare dwarf inanga (Galaxias gracilis) has been recorded in 11 lakes, including eight lakes on the Pouto Peninsula and the three Kai Iwi lakes. One dwarf inanga population from Lake Kai Iwi has become extinct, probably due to the introduction of pest fish, and numbers are declining in other lakes.