Dune systems provide natural protection for coastal communities from coastal hazards such as flooding and erosion (storm surge and wave effects). Functioning dune systems can provide a key defence against the effects of coastal hazards which are set to increase with projected climate change. A well maintained dune system with appropriate vegetation cover and sand supply will repair itself after storm events. This allows a dune to afford a self-perpetuating protection existence between the land and sea. 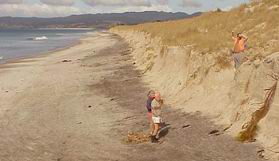 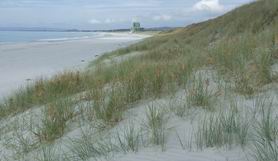 In response to the degraded state of Northland's dunes and their importance to mitigate against the effects of coastal erosion and climate change, the Northland Regional Council has developed the CoastCare initiative to help assist communities and other government organisations with dune restoration.

Pressures on our dune systems

The dunes were then further modified through subdivision and other developments. The frontal dune was often bulldozed and levelled and in some instances capped with soil and grassed. This provided platforms suitable for housing, businesses, esplanades and roading.

Damage to the native sand-binding vegetation has been widespread in Northland and can be attributed to:

· The initial grazing of dune areas by stock.

· The introduction of animal pests such as rabbits and hares.

· The introduction of plant pests such as lupins, marram grass, ice plant and kikuyu.

· Encroachment gardening on dune systems by 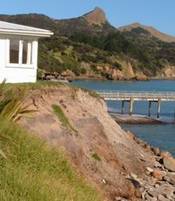 · The inappropriate use of vehicles on dunes, which displaces vegetation and causes blow outs in sand dunes.

· The increased level of pedestrians on dune vegetation, which can also cause blow outs, if the use is intense.

· The effects of sand mining both in the back dune and off shore area.

State of our dune systems

There are very few dune systems in Northland where the original lowland, dune or coastal forests remain intact. Some of the more remote areas, such as Pouto peninsula, Kokota spit and Cape Reinga (Aupouri Peninsula), are Northland's best examples of pristine dune areas. Even these dunes are under threat from inappropriate vehicle use (Pouto) and the invasion of exotic pest species (Kokota spit).

Pouto peninsula, one of the few relatively pristine dune systems remaining in Northland

Dune systems are ‘healthier' on the west coast than the east coast of Northland on account of lower resident populations, with the exception of Omapere, Opononi, Ahipara and Waipapakauri. However, this is set to change as subdivisions on the west coast develop and pressure from vehicle use increases as southern authorities begin to exclude vehicle access to their beaches.

In comparison the east coast dunes are in a great state of decline, with some areas such as Rangiputa, Cable Bay, Tauranga Bay, Matauri Bay, Paihia, Oakura, Teal Bay, Wellingtons Bay and Waipu Cove modified almost beyond repair. This modification can be linked to a longer history of human inhabitation leading to more intense housing and development. 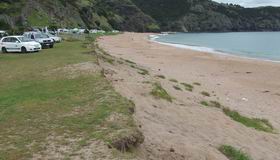 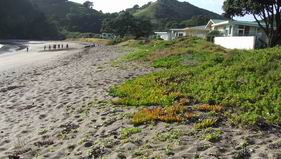 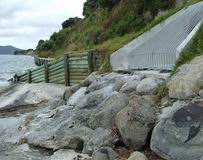 Seawalls have often been constructed to try to protect houses built on bulldozed dunes which are susceptible to the effects of sea level rise and coastal erosion. These seawalls, although protecting property, lead to a lower beach level and therefore a loss of high tide beach and generally detract from the natural character of the coastline.

Protective works where roading is threatened by erosion often has a similar effect to seawalls and stormwater outlets can have a significant impact by aggravating dune erosion during coastal storms.

Seawall and stormwater outflow at One Tree Point (see right).

To assist with this role, a targeted funding amount was made available in the Environment Fund exclusively for CoastCare groups wishing to undertake dune restoration projects. This fund currently supports nine projects with several more proposed for the coming year.

The Northland Regional Council has also hosted two seed collection, propagation and planting workshops to provide technical assistance to CoastCare groups and other agencies wishing to grow coastal dune plants. The workshops have been well attended and the feed back from participants has been very positive.

In response to increased concern from the public over the misuse of vehicles in the coastal environment, the Northland Regional Council co-ordinated a multi-agency education campaign with the Department of Conservation, NZ Police and Far North District Council. This education campaign occurred over three weekends in late summer 2007, in the three districts: Whangarei (Bream Bay), Far North (Ahipara and Waipapakauri) and Kaipara (Baylys Beach to Glinks Gully).

The education days were used to patrol the beach giving out safe driving information and undertaking a pilot survey. Over half of the people on the beach surveyed think there is a problem with vehicles on beaches, in particular with speed and dangerous driving and they would like to see increased policing on beaches to deal with this problem. This programme will be repeated again next summer. 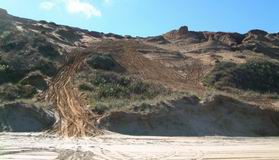 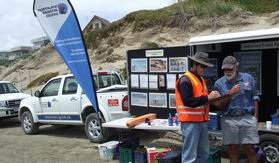 There are currently 14 coast care groups and individuals throughout Northland registered with the Regional Council. Examples of two CoastCare groups are below:

The Omamari Beach Care Group was established in 1997 in response to a shifting river mouth which threatened to undermine older sand dune cliffs. The group managed to have the stream realigned directly to the sea and undertook an extensive planting programme to stabilise the dunes.

The group erected a large brush fence to keep people and vehicles out and trap the moving sand. In the fenced compound the group planted native sand binding plants grown from their own nursery. The group has been so successful that some members have completed their level 2 Horticultural Certificate which was he

ld at the volunteer nursery at Omamari. The nursery also supplied plants to the Kaipara District Council and Pouto marae for other restoration projects.

The group is now working on protecting the back dune area and in particular the area next to the Omamari stream where members are planting, creating walkways and removing water weeds. A pest programme has also been adopted to control rabbits, possums and feral cats.

The Waipapakauri Coastal Care Group was set up in response to the sand dune inundation and degradation that was being caused by pedestrian, vehicle and livestock (wild horses) use and damage of the dunes. The group has sought to protect and reinstate the Waipapakauri dune system through management of recreational vehicles and pedestrian pressures.

To do this the group has fenced off the dunes and created one pathway for pedestrian access from the car park to the beach.

The group members undertook the works using locally donated materials and their own labour. The access way over the dunes has been a huge success with tourists who disembark at Waipapakauri and use the access way as a viewing point. 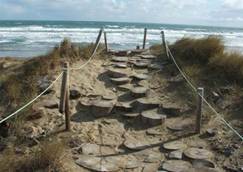 The group has also been attempting to stabilise the sand dune blow out by erecting sand fences to capture the sand. Funding has been secured, which has allowed group members to purchase sand-binding plants. These have been planted by the group, community members and children from local schools.

The Waipapakauri Coastal Care Group is committed to restoring the degraded dune system and has achieved great success so far.