6.3 What is the state of our coastal environment?

Northland's coast is predominantly comprised of rocky shores, sandy beaches and barrier-spit systems backed by dunes and cliffs, with backshore areas comprised of dune fields and to a lesser degree coastal wetlands and coastal forest. There are more than 13 harbours and many other smaller estuaries, containing extensive mangrove, sea grass and wetland habitats.

Northland's natural coastal systems have been modified over time. Coastal forest is confined to a few islands and limited areas on the mainland and no completely natural dune systems remain. Coastal salt marsh wetlands have been reduced to less than 5% of their original area through drainage and reclamation.

Amongst the most modified natural systems are the infilled barrier spit systems, such as Taupo Bay and Taipa. These systems are well developed, mainly with residential dwellings. As most of Northland's infilled barrier spit systems are becoming developed to capacity and demand for coastal property increases, pressure to develop other coastal systems is coming, such as the Ngunguru sand spit and the prograded holocene dune systems of the west coast.

Coastal protection work, such as seawall construction, has proliferated in coastal areas where coastal developments are inappropriately sited with respect to the natural variability of coastal systems. Coastal structures, such as wharfs, jetties and boat ramps, are also commonly placed adjacent to developed coastal systems. Increasing development and occupancy of the coast has resulted in an increased demand for these structures, and the proliferation of water craft use and associated facilities such as moorings, marinas and boat ramps.

As at 1 July 2007 there were 2812 permits for moorings and 1089 permits for other coastal activities (mostly structures) in Northland, as shown in table 1 (below).

Table 1: Number and type of active coastal permits and mooring permits at 1 July 2007

Note 1: This includes all privately owned moorings but not moorings associated with Marinas such as the Whangarei Town Basin, which are covered under the marina consent.

Note 2: This figure does not include the approximate 200 deemed coastal permits, which where authorised prior to the RMA 1991. These structures are monitored every three years by the Council.

Note 3: Approximately 100 marine farms administered by the Ministry of Fisheries where transferred to the Council under the Aquaculture Reform (Repeals and Transitional Provisions) Act 2004. These Leases, Licence and Marine Farm Permits are deemed to be coastal permits granted under the RMA 1991, but are still in the transitional phase, so are not included in the above figure. 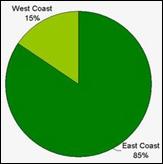 The greatest development is located on Northland's east coast, where the natural character of estuaries, embayments and barrier spit systems is modified by extensive residential areas. At April 2007 approximately 98% of moorings and 85% of coastal permits for coastal activities, such as structures, were located on the east coast of Northland in figures 1 and 2 (right). 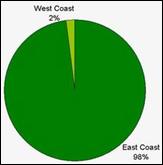 Table 2: Location of Mooring and Coastal Permits by Area.

Figures 3 and 4 (below) clearly show the congestion of coastal permits, including moorings, structures and marine farms in the Whangarei Harbour, Bay of Islands and Kerikeri inlet. 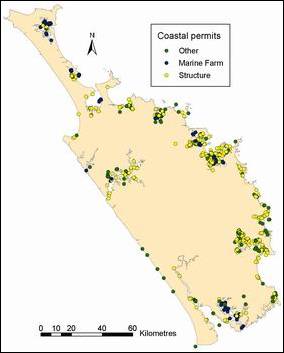 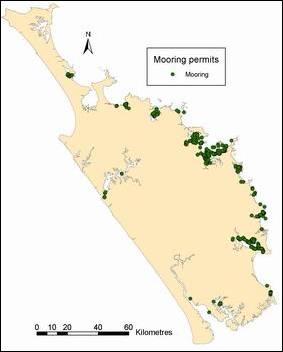 This subdivision data comprises consents granted by the District Councils. Some of the subdivision developments may not have started or could still be under development, and some completed developments can have empty lots for several years. However, this data does give a useful indication of both current and future pressures on Northland's coastal environment.

Between August 2002 and July 2005 there was a total of 715 subdivision applications granted for Northland within one kilometre of the coast as shown in table 3 (below). These subdivisions include 3822 lots, which equates to an average of just over 5 lots per subdivision.

Table 3: Subdivision applications granted from August 2002 to July 2005 for subdivisions within 1km of coast for each District and the total for Northland.

The photograph below is Marsden Cove development, an example of a large scale coastal subdivision. This particular development located near the entrance to the Whangarei Harbour commenced in 2005 and includes a canal development, with a dredged access channel, 250-berth marina and 700-lot residential subdivision.

An example of a large-scale coastal subdivision at Marsden Cove near Whangarei.

The greatest coastal subdivision pressure for the three-year period was focused around the areas of Whangarei Harbour, Mangawhai, Kerikeri, Eastern Bay of Islands, Ngunguru/Pataua and the Otamatea arm of the Kaipara Harbour as shown in table 4 and figures 6 and 7 (below). Each of these areas had more than 50 subdivision applications granted between August 2002 and July 2005 equating to more than 130 lots for each area.

Table 4: Subdivisions granted between August 2002 and July 2005, split into catchment areas, with their respective number of lots. These results are also shown in figures 6 and 7.

Other areas with substantial subdivision consents granted in this three-year period were Oruru/Oruaiti (Doubtless Bay area), Bream Bay, Waitangi and Karikari Peninsula. These four areas all had more than 20 subdivisions approved with more than 100 lots in total for the area.

The concentration of subdivisions and high lot numbers in Whangarei, Mangawhai and Kerikeri areas between August 2002 and July 2005, is obvious in figures 6 and 7 (below), shown in red. For the Whangarei District the very large subdivisions (greater than 50 lots per subdivision) are located at Ruakaka and Marsden Point as shown in figure 8 (right). The majority of other smaller subdivisions were in Whangarei City itself, in the Ngunguru, Tutukaka and Matapouri areas or in the Waipu area.

For Far North District all large subdivisions (greater than 50 lots) are in the Kerikeri and Bay of Islands areas, with hundreds of smaller subdivisions as well, as shown in figure 10 (below right). There are also many small subdivisions spread along the coast of the Hokianga Harbour and in the Doubtless Bay area. 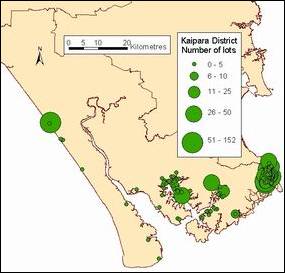 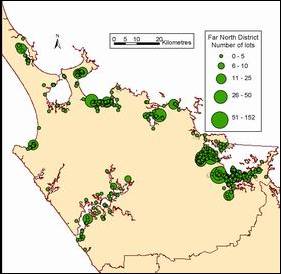 As these subdivisions are settled they have the potential to place many pressures on the coastal environment, including:

· Sediment run-off if not well managed and contamination of stormwater run-off.

· Sewage discharges as many are in areas without municipal wastewater systems.

· Demand for boating facilities such as ramps, marinas and jetties.

· Damage to natural dune systems and demand for protection against natural hazards.

Indirect modifications to natural character of the coastal environment

Land use practices, such as deforestation and conversion to pastoral land, have resulted in increased sediment loading and nutrient enrichment of estuarine systems. This appears to have contributed to the expansion of mangroves in estuaries. Trapping of sediment by mangroves and the subsequent mangrove expansion has changed the natural character of many estuarine systems. There are a number of anecdotal accounts of mangrove areas that were once sandy, estuarine beaches. Deforestation in the Parengarenga Harbour, causing increased sediment loading and proliferation of mangroves in estuarine environments.

Seagrass populations have also been lost from estuaries due to sediment loading from land use or industry. In 1942 there were an estimated 1400 hectares of seagrass meadows in Whangarei Harbour, but due to effects of sedimentation, only small patches remain today. See Case Study 2 for more information.

Introduced pest species, such as Spartina sp. and Asian date mussels, also modify the natural character of the environment by displacing indigenous flora and fauna, increasing sedimentation and creating a mainly homogenous habitat of low diversity. Spartina incursion in the Otamatea arm of the Kaipara Harbour.