The Lake Omapere Trustees (LOT) and the Northland Regional Council (NRC) received funding from the Ministry for the Environment's Sustainable Management Fund. This funding was provided to undertake a restoration and management project in regard to Lake Omapere from 2004 to 2006.

The project included the development and implementation of a voluntary lake management strategy that will work towards improving the health of Lake Omapere while re-establishing the role of the Lake Trustees as kaitiaki. The Lake Omapere Trust and Northland Regional Council's Chairman formally signed the ‘Restoration and Management Strategy for Lake Omapere' on 29 September 2006, at a ceremony held at the Parawhenua Marae near the lake. The strategy incorporates aquatic weed management and integrated catchment management programmes, as well as biodiversity enhancement and regular monitoring of water quality.

The integrated catchment management included the development of farm management plans for farms in the lake catchment and encouraging and supporting fencing and plantings within the catchment. 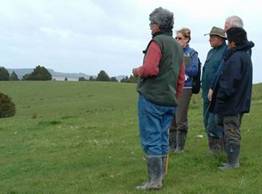 One of the activities being supported by the Council within the catchment of Lake Omapere is the preparation and implementation of farm management plans. The objective is to reduce the "loss" of nutrients from farming activities and the consequent impact of such nutrients on water quality within the lake. The plan includes detailed soil and slope maps and a nutrient budget (prepared by fertiliser companies).

In January 2006, 13 of the 19 farms which are in, or partly in, the Lake Omapere catchment had been mapped by Regional Council land management staff. This covers 93% of the surface water catchment area.

To ensure that the nutrient budgets meet the needs of the Council, the Council has, with the support of the fertiliser companies, agreed to audit the plans that have been prepared, the way farmers interpret the plans and how they are being implemented. An independent consultant employed by the Council visited four farmers during December 2005 to discuss their fertiliser programmes, to verify the information gathered by the fertiliser company representatives, to assess the farmer's understanding of the contents of the budgets and how he or she is using the budget.

At January 2006, 41 km of fencing to exclude stock from waterways including the lake, has been undertaken within the catchment. Note that there is an error margin of approximately 10% due to most figures being calculated from aerial photography.

It has been calculated that a further 44 km of fencing is required to complete works to exclude stock from all waterways (including drains) and the lake margin. Of this 44 km, four landowners have committed to completing 4.8 km of fencing fully at their own cost. Of the remaining 39.2 km of fencing, 22.5 km is on one property.

In order to maximise the success of planting undertaken on the lake margins, the plants will be grown from locally sourced seeds. A seed collection programme was undertaken for the following plants: toe toe, harakeke, totara, ti kouka, kahikatea, manuka, taraire, kauri, kuta, raupo and puriri.

A nursery on the lake edge was successfully completed, with the help of funding from the NRC Environmental Fund and the FNDC Significant Natural Areas Fund.

Currently plants are being propagated at this lakeside nursery and the Department of Conservation volunteer nursery in Kerikeri. The largest farm, which covers 20% of the catchment area, is developing its own nursery area for propagated plants for their planting programme.

Every year successful community days have been held with over 10,000 native trees and flaxes planted up to the end of 2006-2007 (NRC 2007 – Annual Report). There have also been significant contributions from Ngawha Correction Facility inmates, landowners and local schools.

The aim is to have the entire lake margin protected with harakeke, raupo, kuta and Carex secta. This will mean ongoing stock exclusion from the lake margins and further planting in the future in between the areas planted in 2006 and 2007.