The Regional policy Statement (RPS) for Northland sets out objectives for the maintenance and enhancement of soil and land resources in Northland, including mitigating the effects of land use on water quality and the control of pest plants and animals.

The RPS for Northland is available on the Council website at the following link:

The Regional Water and Soil Plan (RWSP) for Northland (NRC 2007) contains rules relating to land disturbance and vegetation clearance. The Council has targeted the most control on those areas at the greatest risk; steep land with high erosion potential, and the area adjacent to water bodies which has been defined as the "riparian management zone".

The RWSP for Northland is available on the Council website at the following link:

The Regional Pest Management Strategy (RPMS) for Northland (NRC 2003) is an action plan that describes why and how plant and animal pests will be controlled in Northland. Although RPM strategies are not compulsory, the Council has developed one for Northland because the benefits of doing so outweigh the costs (after taking into account the likely consequences of doing nothing).

The RPMS for Northland is available on the Council website at the following link:

As a consequence of the 2004 floods and extensive soil erosion in the Wanganui, Rangatiki and Manawatu areas, the government has reviewed the administration of soil conservation in New Zealand. A national flood risk reduction strategy requiring a whole catchment approach to soil conservation and river management has been adopted by government. The Regional Council is currently reviewing its involvement in soil conservation in Northland.

Dairying and Clean Streams Accord

The national Accord, a contract between Fonterra, the government (MAF and MFE) and Local Government New Zealand (regional councils), aims to promote sustainable dairy farming in New Zealand. It focuses on reducing the impacts of dairying on the quality of New Zealand streams, rivers, lakes, groundwater and wetlands.

The six priorities for actions and national targets outlined in the national Accord are:

· Fonterra and regional councils to develop Regional Action Plans for the main dairying regions to implement this Accord by June 2004. 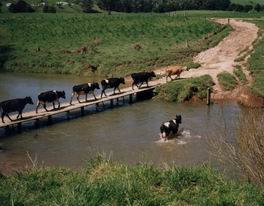 100% of dairy farms to have in place systems to manage nutrient inputs and outputs by 2007.

The Regional Council and Fonterra co-signed the Dairying and Clean Streams Accord Regional Action Plan for Northland in May 2004. The purpose of the Regional Action Plan is to identify local commitments and to support the national Accord principles of developing actions that are adapted for local conditions, practical, cost effective (whilst recognising the practical and financial constraints of implementing time frames) and that will make a real difference.

In general farmers have progressed well towards meeting the targets, as shown in table 10 (below). There was a significant increase in the number of farmers meeting the nutrient management system target from 22% in 2005/2006 to 97% in 2006/2007. This is largely to increased advocacy and support by both Fonterra and the fertiliser companies who provide these nutrient management plans to the farmers.

Table 10: Progress towards meeting the performance targets contained in the Northland Regional Action Plan for the Dairying and Clean Streams Accord.

This data is collected by Fonterra during their on-farm Environment and Animal Welfare Assessment carried out annually with every supplier (MFE 2006). It should be noted that farmer participation in the assessment is voluntary (however there is a 99% participation rate) and most of the answers to the assessment are based on the farmer's response. Therefore there is the chance for inconsistencies between farmers. For example, what each farmer includes as a waterway or what they believe is an appropriate stock exclusion method or stock crossing may vary. Fonterra have however carried out independent auditing, which has shown that the survey method used provides robust data (MFE 2006).

It also should be highlighted that this only includes waterways that are wider than a stride, deeper than a red band gumboot and permanently flowing, under the definition of a waterway in the Regional Action Plan for the Accord. Many small streams in Northland do not fall into this definition and therefore are not included. For example, if all the streams on a farm are narrower than a stride, than this farmer most likely responded in the assessment as having no waterways on their farm. However these streams are still classed as waterways in the RWSP and RMA.

National reporting on the Dairying and Cleans Stream Accord targets is available at the following link on the Ministry for the Environment's website.

Intensification of pastoral farming and increased availability of improved herbicides has resulted in a general reduction of pest plants in most pastoral farming areas. Retirement or changes to land use on marginal pastoral land has reduced the economic impacts of weeds in these areas (Doug Foster, NRC, pers. comm.).

In addition to the regulatory approach outlined in the pest management strategies the Council is also involved in programmes to release biocontrol agents and supporting the establishment of Community Pest Control Areas (CPCAs). Over the last five years 21 Community Pest Control Areas have been established in the region that focus on weed management, such as wild ginger and mothplant control. These CPCAs cover an area of 22,000 hectares of private land and include the involvement of over 600 ratepayers.

More information on CPCAs is available on the Council website at the following link:

Recent research on new and emerging weeds for Northland identified 32 species which are established in Northland and could pose a new threat to the environment or economic values of the region. Included are species such as Phoenix palm (Phoenix canariensis), which is spreading rapidly into forests close to urban areas, and Giant reed (Arundo donax), which is colonising the margins of our roadways. A review of the pest species managed under the Regional Pest Management Strategy is underway and control of new weed threats will be considered an important part of the process.

Ongoing control work for a wide range of pest animals, including rabbits, goats, possums and mustelids is being carried out by individuals, community groups (with and without the assistance of the Council) and other government agencies. The resurgence of the use of possum fur in the clothing industry has provided added incentive for possum control. The fur recovered from possum control indicates that at least an average of 11,000 possums per month and an estimated 0.5 million have been killed over the last four years in Northland (Scott Candy, Basically Bush Limited, pers. comm.).

Rabbits, goats, possums and mustelids are all covered by individual pest management strategies for Northland, which are available on the Council website at the following link: 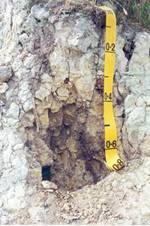 Rabbit Calicivirus Disease (RCD) is present in Northland and adds a biological control option for managing rabbits. NRC has been involved with targeted releases of the virus in Northland. For the virus to be effective it is important that it released at the correct time and in the correct manner. For further information please contact Council biosecurity staff.

Twenty-five sites around Northland, of varying land uses and soil types, were initially sampled in 2001 as part of the national 500 Soils project. These 25 sites were resampled in June 2007 for chemical and physical properties including heavy metals.

For more detailed information on the results from the 2007 sampling refer to the detailed report (Stevenson 2007) available on the Council website at the following link:

A nutrient management plan is a tool that can help land owners to utilise nutrients on the farm, effectively leading to an increase in both financial and environmental performance. One of the key components of a nutrient management plan is the nutrient budget for the property. Fertiliser companies and farm consultants are able to work with land owners to develop a nutrient budget for the property using the Overseer computer program developed by AgResearch. The computer program allows the modelling of fertiliser inputs and outputs for a number of different scenarios on a farm. It will identify where nutrient applications are above or below what is optimum for a given situation.

Use of a nutrient budget can lead to more efficient use of fertiliser resulting in less nutrient loss to waterways and greater farm profitability. The Cleans Streams Accord has encouraged all dairy farmers in the region to develop nutrient budgets for their properties. An increasing number of sheep and beef farmers are also starting to adopt nutrient budgets.

During the 2005-2006 the Council employed an independent consultant to audit the development and implementation of nutrient management plans prepared by fertiliser companies for farms within the Lake Omapere catchment. The findings were used to help the companies improve the standard of their service.

The Regional Council has held eight erosion and sediment control workshops for developers, earthwork contractors and planners in 2006 and 2007. The aim of the workshops was to increase understanding on best management practices to reduce adverse effects on the environment from earthworks.

The workshops covered the erosion and sediment control standards required by the Resource Management Act and Regional Council plans, the skills needed to ensure staff and subcontractors meet these standards and how contractors can improve their site compliance record. Some of the many topics covered during the course include:

· the extent of sediment run off and erosion in Northland,

· what impact sediment has on the environment,

· tactics and tools for dust, erosion and sediment control,

So far approximately 200 people from 50 different companies/organisations have attended. Very positive feedback has been received from attendees and there is still significant interest from contractors who have not yet been able to attend due to courses being fully booked. More workshops will be held in the future as required.

The Envirolink scheme funds research organisations to provide regional councils with advice and support for research on identified environmental topics and projects.

The Northland Regional Council has initiated a number of Envirolink research projects that are associated with land use in Northland. Reports completed as part of the Envirolink scheme are available at the following government website:

The Northland Pastoral Farming Development Group comprises representatives from the Council, pastoral farmers, service and supply companies and training providers. The group has a mandate to give effect to the pastoral farming component of Northland's strategy for sustainable economic development Northland Forward Together - Kokiri Ngatahi Taitokerau. The group is involved in a number of projects that centre on promoting research that is beneficial to pastoral production and promoting the dissemination of new and existing research material in a form useful to Northland farmers.

There are currently more than 55 Landcare and community groups operating in Northland, many of which are involved in a range of biodiversity focused projects from small scale possum and pest insect control and plant pest eradication, to large ecosystem protection projects.

· increased land value through enhancing the natural appearance of properties.

Applications are accepted through an annual funding round; the fund will meet a percentage of the project costs of successful applications. A range of different projects are eligible for funding including pest and weed control, bush protection, riparian protection and enhancement, coastal protection and re-vegetation projects. Since 1996 $1.5 million has been allocated from the fund to various projects.

Visual Soil Assessment (VSA) is a means of monitoring soil quality that can be used in the field by landowners. VSA is based on the visual scoring of key bio-physical indicators of soil quality. The soil indicators are supported by plant 'performance' indicators that link soil condition to crop and pasture production. The system allows landowners to monitor changes that are occurring to the soil over time as well as getting a better understanding of how to visually assess the health of their soil.

Northland Regional Council has run, in conjunction with industry groups, VSA workshops for landowners throughout the region. The field guides and score sheets are currently being updated and reprinted. Once available the Council will run another series of workshops.