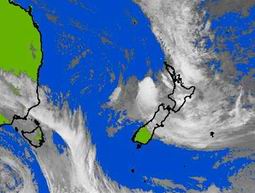 On Tuesday 27 March at 11.10 am the MetService issued a Severe Weather Watch for Northland. This indicated the development of a low pressure system in the northern Tasman blocked by a high further to the east. Together these would bring a strengthening, humid north-east flow on to the North Island with rain spreading south. This watch was upgraded to a full warning at 8.40am on Wednesday 28 March with an expectation that 100 – 150mm of rain may fall and that heavy falls in the order of 50mm over 2 – 5 hours may occur through Thursday and into Friday.

MetService satellite image of the weather system over Northland on the 29 March 2007 (right).

As a result, a north to north-easterly flow spread on to Northland bringing with it widespread rain. Areas first affected were the Far North and particularly Kaeo and the Bay of Islands. Rivers were starting to rise on Wednesday evening. By midnight Wednesday NIWA's Maungaparerua rain gauge, in the western hills of Kerikeri, had received 175mm and NRC's gauges at Kaeo, Ohaeawai and Ngunguru had all recorded falls exceeding 100mm. Many other NRC gauges exceeded 50mm. NRC released a media report on Thursday morning indicating the potential for widespread flooding, particularly in the Kerikeri area. The Kaeo River was severely swollen and other rivers in the Bay of Islands and further south were rising rapidly. Also, the Mangakahia, Opouteke and Hikurangi Rivers showed rapid rising water levels and together with a predicted four-metre flood peak from the Wairua River, extensive 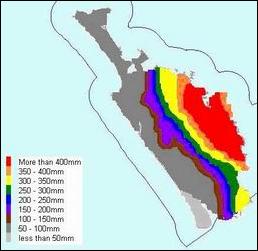 flooding was expected on the lower flats of the Mangakahia, Wairua and Northern Wairoa Rivers (Tangiteroria). Flood warnings were issued for these areas.

By Thursday morning the MetService expected another 30 – 50mm in the Bay of Islands and up to 90mm further south. The event was larger than anticipated with rains falling over a longer duration as the moist north-easterly continued funnelling into the eastern coast and with only a slow movement southwards.

Rain had cleared in the Far North early on Thursday but eastern areas from Kaeo south continued to receive significant falls. By midnight on Thursday Ngunguru and Puhipuhi gauges had received over 330mm each on top of Wednesday's falls with two day totals exceeding 430mm. Along with these two gauges four other gauges exceeded 300mm (Maungaparerua, Oakura Bay, Kaeo and Tara near Mangawhai). Heavy rains finally cleared the Bay of Islands by late afternoon on Thursday and from our southern parts in the early hours of Friday.

As a consequence rivers rose to very high levels in parts of the region. Rivers around the Kaeo/Bay of Islands area were some of the first to rise late on Wednesday 28 March and continued to rise through most of Thursday. Many rivers flowed out of their channels, including Kaeo, Waipapa, Waitangi, Waiharakeke, Whakapara, Hatea, Ruakaka and Waipu, all resulting in road closures and large areas of farmland inundated with floodwater. There was also significant surface flooding and subsidence affecting many residential areas.

High water levels in the Whakapara River (above) resulted in severe flooding on SH1 by Puhipuhi Road intersection (top right) and a vehicle being swept off the road (bottom right).

Based on 24-hour rainfall totals as shown in table 4 (below) and the tables of return period assessments for selected sites, this storm was equivalent to a 1:150-year rain event. 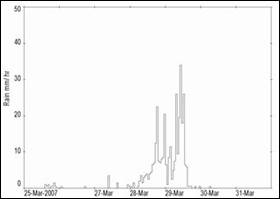 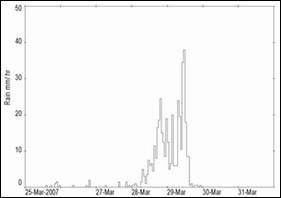 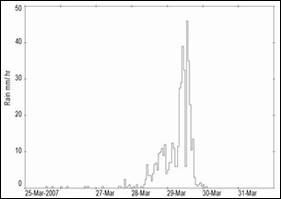 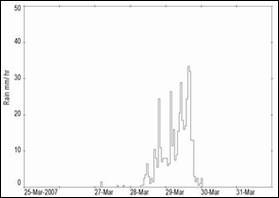 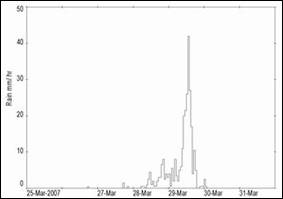 For many rivers around Northland the height recorded in March 2007 is the highest on record, as shown in table 14 (below).

* The Kerikeri flood in 1981 is ranked first for Maungaparerua at Puketotara Rd. 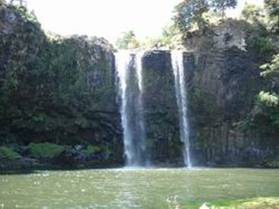 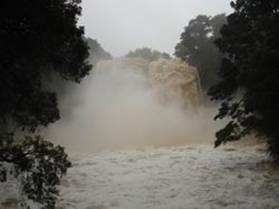 The water level recorded on the 29 March at the NIWA station Waitangi at Wakelins station above Haruru Falls is the now the highest on record as shown in figure 19 (below). The red line indicates the previous maximum water level recorded at this station during the Kerikeri flood in March 1981. The Northland Regional Council acknowledges the MetService for the images presented and NIWA for the information supplied from their water level and rainfall stations during this event.

For more detailed information on the March 2007 floods refer to the detailed reports available at the following link: