10.2 What are the pressures on our water resources?

Northland's water resources are under increasing pressure to meet demands from a variety of consumptive users. These users include the agriculture, horticulture, domestic water supply and industry sectors. Taking water for these sectors must be considered against the ability of the water to maintain its life-supporting capacity for aquatic life, aesthetic value and the spiritual and cultural value of water to tangata whenua. Lower water levels can result in increased water temperatures, depleted dissolved oxygen levels, increased algal growth and general degradation of water quality. Low water levels also reduce the ability of water bodies to assimilate waste.

Different uses and values are not always compatible, particularly during summer months when there is less water available. To ensure that conflict between the use of water resources and the potential for adverse effects from excessive uses are decreased, efficient use of water must be promoted. Water resources are managed through the RMA 1991, regional plans and resource consent process.

Surface water availability within the region is affected by consumptive water use, including surface water takes, dams and diversions, and culverts and fords. Pressures are also placed on lakes and wetlands, with land use change having an impact on most aspects of water quantity.

Northland Regional Council requires resource consents for most major surface water takes, with the exception of farm water supplies which have traditionally been authorised as permitted activities. There are 381 consents allocating approximately 500,000 m3 of water per day from streams, rivers and dams in Northland (excluding diversions).

Over 60 of these consents are for the expansive Wairua River Catchment as shown in figure 1 (below). This does not include surface water takes authorised as permitted activities under the Regional Water and Soil Plan (RWSP) for Northland (NRC 2007) such as smaller takes for farms, lifestyle blocks and domestic supplies.

The number of consents has decreased by about 35 with a reduction in total water allocated of 60,000 m3/day since the 2002 SOE report (NRC 2002b). However, errors in calculating total allocation in 2002 are likely to have occurred due to inconsistent recording of total volumes of water allocated. In addition more efficient allocation has occurred over the past five years, which is likely to have resulted in decreased ‘on paper' allocation. It is important to note that the total allocated does not represent the actual volume of water taken. Figure 1: Number of surface water take consents in Northland at 30 May 2007 by catchment. Figure 2: Water allocated by surface water take consents at 30 May 2007 by catchment

Many sub-catchments in central and southern areas, particularly in the Wairua Catchment, are highly over-allocated, as shown in red in figure 3 (below). 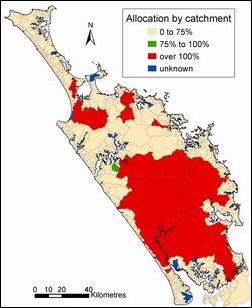 When interpreting figure 3 it is important to consider the following:

· Percentage allocation is based on total consented volume compared to 15% of estimated MALF as recommended by NIWA for assessment of allocation (NIWA pers. comm.). Therefore this allocation assessment has no scientific basis or policy basis for surface water catchment allocation in the Northland region.

· NRC currently has no policy on total allocation (limit) for surface water resources. Each consent is assessed on a case-by-case basis and conditions imposed to require design minimum flows to be maintained.

· The estimated MALF for many catchments has a large degree of uncertainty due to limited naturalised gauging data.

· Allocation is based on consented surface water takes and dam water takes registered on the NRC database within the catchments specified by NIWA. This does not include consents to divert water, or takes that are allowed for as a ‘permitted activity' and therefore don't have consent. 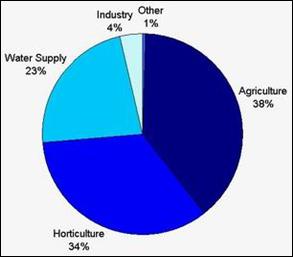 Agriculture is the greatest user of water in Northland as shown in figure 4 (right). However this has decreased over the last five years from approximately 52% to 38% (NRC 2002b). This water is mainly used for irrigation. Please note figure 4 does not include water taken as a "permitted activity" (reasonable domestic and stock drinking needs), as very few permitted takes are registered with the Council. It also excludes the Wairua Power Station take, as this is a consent to take, divert and discharge up to 2,592,000 m3 per day.

Horticulture accounts for 34% of the total volume of water allocated. Most of the horticulture activities take place on the fertile volcanic soils near Maungatapere, Maungakaramea, Kerikeri, Aupouri Peninsula and on the sandy clay loam soils on the west coast, near Dargaville.

Water supplies to towns and cities account for 23% of the total allocation of water for Northland. The District Councils are the main suppliers of water, taking from streams, rivers, springs and dams. As increased development occurs near urban and coastal areas, demand for water supply in these areas will increase and additional sources of water will have to be found. Historically and currently some towns are facing problems finding additional water sources to supplement existing supplies, and provide for future development (such as Kaikohe and Russell).

Water use for industrial needs is low, comprising only 4% of total surface water allocation in Northland. Some of the largest water users include dairy factories, meatworks and cement works. Notably, some of the major, and many minor industries in the region utilise urban public water supplies (for example in Whangarei and Kaitaia).

Under the rules of the RMA 1991 and section 9 of the RWSP for Northland (NRC 2007) water can be taken from surface water resources provided specific criteria are met.

Under the RMA water may only be taken and used for stock drinking water and domestic purposes "as of right" (S14). Other purposes usually require a water permit. The RWSP has policies and rules controlling, amongst many other activities, the taking and use of water from bores, streams, lakes and dams.

In most catchments surface water can be taken at a rate up to 10 cubic metres per day for any purpose provided specific criteria are met and water user information is supplied to the Council upon request.

It is likely that many farms exceed the daily water take limit to meet the permitted activities rule for their farm water supplies and therefore should have consents for these takes. It is also highly likely that the number of permitted takes has increased significantly over the past 10 years as a result of an increased number of lifestyle blocks.

The Council currently has no knowledge of the locations and volumes of water taken as permitted takes. The absence of this information is likely to influence consented design minimum flow requirements and sustainable management of the water resources.

Where a consent application to take groundwater is likely to affect springs or stream flows, a condition of any subsequent consent granted restricts the groundwater take during low-flow conditions and ensures that the downstream flows are sufficient to protect existing users and instream values.

Northland has an increasing number of dams, of which 144 are consented activities. Dams range in size and purpose. Dams smaller than 0.5 m in depth are primarily used on farms for stock water, and rely solely on runoff for replenishment. Dams greater than 0.5 m and less than 3 m deep are generally used as small storage dams for recreational parks, wetlands, and agricultural needs. Larger dams are used for a range of activities including agriculture, horticulture and public water supply.

Most of Northland's oldest dams were built for municipal water supply. The early 1980s saw the development of the Kerikeri Irrigation Scheme and the creation of two large irrigation dams, associated supply dams and weirs to provide water for horticultural purposes. The occurrence of the 1986-1987 and 1990-1992 droughts prompted the then Northland Dairy Company to promote dam construction for pasture irrigation to dairy farmers.

There are 383 consents for diversions in Northland. Diversions can occur when the existing river channels are straightened, meanders removed, channels created to divert water from the natural watercourse or stop banks are built to contain floodwaters. Despite helping to reduce the impact of floodwaters on life and property, diversions can lead to erosion of river beds and banks, inhibit fish passage, disrupt aquatic environments and affect water quality.

Land use changes have had a direct effect on river flow and water balance. Trends in land use over the last 30 years are listed in table 2 (below). Land use trends over the past five to 10 years indicated increased subdivision and urbanisation. Future use trends suggest that this development particularly in the coastal areas and surrounding urban areas are likely to continue.

The cumulative effect of urbanisation increases water demand and, where development is not supported by a reticulated water supply, there is the potential for an increase in the number of small (‘permitted' takes).

Urbanisation also changes the flow regime for both surface and groundwater by increasing runoff into surface waters and decreasing recharge to groundwater.

Table 2: The effects of land use change

There are only a few surface water takes for lakes in Northland. However, as most lakes are relatively small and shallow, they have a sensitive water balance and a limited capacity to assimilate any contaminants. They are prone to nutrient enrichment from stock and fertiliser, particularly where lakeside vegetation has been grazed or removed, and where there is direct stock access to the lake.

The drainage of wetlands has resulted in many wetland species now being rare or endangered. Drainage has other adverse effects, such as loss of buffer storage for flood waters, which leads to increased flood peaks and reduced summer flows, as well as loss in the capacity of wetlands to trap and reduce sediment, nutrients and other contaminants.

The main points of the assessment should be noted:

· Overall annual rainfall may not change, although rainfall trends for the next 30 to 80 years are for increased dry periods (drought and low flows) and increased high intensity rainfall events (floods); and

· The change in rainfall trends and temperature is likely to result in decreased recharge to groundwater resources, and increased potential for saltwater intrusion in coastal aquifers.