The Northland Regional Council operates a waste chemical disposal service, designed to assist homeowners in the disposal of household quantities of unwanted hazardous chemicals. The collection programme ensures waste hazardous substances are disposed of responsibly, rather than being dumped in the natural environment.

The council – in conjunction with PGG Wrightson Ltd. – operates four collection depots in Northland. These were initially intended for agrichemicals and large, empty plastic and metal agrichemical containers, which could not otherwise have been disposed of in an environmentally sound manner. In the past, the majority of these containers were simply buried on farms or burned.

When the service was introduced, there were a lot of legacy chemicals – i.e. chemicals that were banned for use in New Zealand – in storage on farms. These substances formed the main target of the collection programme.

The service is still operating, although there are now commercial services for primary sector users in Northland. These services are paid for by the users, but are subsidised in many cases by the schemes' supporting brands and by the Ministry for the Environment. To find out more about these facilities, go to www.nrc.govt.nz/agrichemicalcollection

The council's mobile chemical collection service – for leaking chemicals or those in broken containers – from individual properties, remains active, with requests to assist in the disposal of waste being received on a regular basis. Household hazardous waste drop-off points around the region are also busy.

Fourteen collections of chemicals were made during 2010–2011, where the chemicals or containers were not in a suitable condition to transport to a drop-off point.

The total amount of hazardous waste collected in 2010-2011 was 4401kg. Of this, 732.4kg was exported, 180.4kg of this being persistent organic pollutants, which do not readily break down in the environment, including DDT, Dieldrin and pentachlorophenol (PCP).

The charts show the various categories of chemicals disposed of, as classified by their hazards and their final fate. The packaging included in the charts refers to the weight of the steel drums that the waste must be packed in.

Council staff also disposed of about a ton of plastic containers to landfill. This is currently the subject of investigation, to ascertain whether there is a more environmentally sound way of recycling this resource. 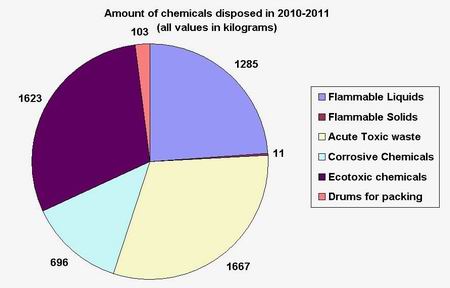 The council is contracted to audit workplaces throughout Northland for compliance with the Hazardous Substances and New Organisms Act 1996 (HSNO), under contract to the Department of Labour. More than 170 sites were inspected by the council's warranted HSNO Enforcement Officers in the past year, with over 70 follow-up visits.

Sites vary greatly in their level of compliance, but sites which exhibited poor compliance initially showed a great improvement once they had been through the inspection process.

The Hazardous Substances Workplace Inspection Programme will not continue from August 2011 due to cost-cutting measures by the Department of Labour.