The programme was started in 2006 due to concerns about the safety of beach users from dangerous beach driving, and damage caused to the sand dunes and beach environment. The number of incidents reported to the Northland Regional Council has been declining since a peak in 2007-2008.

Over the summer 2010-2011 beach information events and patrols were held at Baylys Beach, Tokerau Beach, Ahipara and Ruakaka. Other events such as fishing competitions, roadside fatigue stops and community events were also attended to raise awareness of the potential dangers to beach users and the environment of inappropriate vehicle use on beaches and to promote better beach driving behaviour. 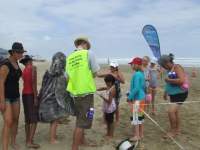 Baylys Beach Society was formed in 2007 to deal with the issue of inappropriate use of vehicles on the beach, which was causing damage to the dunes and posing a risk to other beach users. The group has since fenced off the dunes between Chases Gorge and Baylys Gorge to protect the dunes and native sand-binding plants. Spinifex and pingao have been planted to fill gaps in the vegetation caused mainly by vehicles. The dunes in this area are now recovering well from previous vehicle damage.