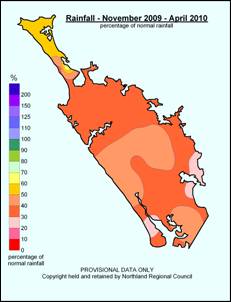 Rainfall amounts from November 2009 to April 2010 were only 300mm along the eastern coast of Northland (normally 800mm), the lowest rainfall amount for this period in 90 years. The regional rainfall deficit over the 6 month period was 400mm. Soil moistures dropped in response to low rainfall and the warmer temperatures and river flows steadily declined in most catchments. Rivers in the far north and eastern areas were at their lowest flows in 40 to 50 years. Many irrigators had to stop taking water from rivers because the levels were so low. Severe drought conditions continued throughout April in areas of the far north and central and eastern Northland. Water restrictions were enforced in the Far North areas during January. The water level in Whāngārei's Whau Valley Dam was only 45% full at the end of April.

Water restrictions were placed in Whāngārei City and Whāngārei Heads areas in April. The fire risk remained high, with a total fire ban in force across Northland throughout the summer.

Northland was not the only region suffering – during early April medium level drought conditions were declared in Rodney, Papakura, Manukau and the Waikato districts.