The abundance of species that are known to be sensitive to human disturbance was generally lower at sites where concentrations of metals and nutrients were elevated. Conversely species that are tolerant to human disturbance were generally more abundant at sites with elevated levels of nutrient and metal contamination. Sediment particle size itself is known to influence biological communities and so further analysis is therefore being undertaken to understand how the sediment quality and sediment particle size is influencing the biological communities.

Concentrations of both phosphorus and nitrogen were high at sites in the Hātea River, Mangapai River, Waipapa River, Kerikeri River and Kahoe River, and at levels that suggest these environments are ‘enriched'. Nutrient enrichment can lead to excessive plant growth, which can in turn cause a rapid reduction in water quality, harmful algal blooms, shellfish contamination, fish kills and a reduction in biodiversity. Nitrogen concentrations in Ruakaka and Whāngārei Harbour were lower than in 2008 but phosphorus concentrations in Whāngārei and Ruakaka had increased in comparison to 2008 levels. 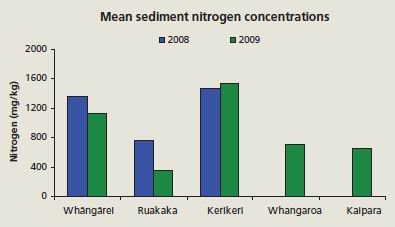 The Hātea River is located in a highly modified urban catchment, where metal concentrations are to be expected while the Kerikeri Inlet has a predominately rural catchment, with little urban or industrial land use, so higher levels are more unexpected. Runoff from roading, urban areas, agricultural and horticultural land, and stormwater discharges are all likely sources of metal contamination in these systems. Further investigation is needed to identify the sources of metal contamination in Kerikeri Inlet and the Hatea River.

Copper is used in roofing, drain pipes, antifouling paint for ships hulls, fungicides, electrical wiring, electronics, wood preservatives, and agrichemicals, and these are all possible sources of copper found in estuaries. Zinc is used in galvanised roofs, drainpipes, house paints, marine antifouling paint, tyres and some agrichemicals such as fertilizers and pesticides. Chromium is used in electronic components, paints, as a wood preservative and as corrosion protection in zinc plated steel. Nickel is predominately used as an alloy in metals, including stainless steal and is also used in nickel-cadmium batteries, paints and computer components. Metals are also found naturally for example in volcanic soils, so soil erosion may therefore also contribute to metal concentrations in our harbours and estuaries. 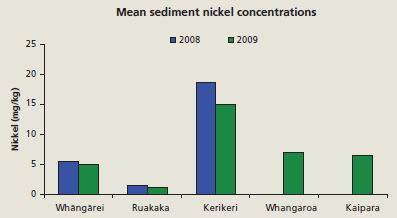 Photo: Quadrat used to sample the number of animals