During 2008-2009, the Council biosecurity team responded to 984 enquiries in relation to pest management.

· Pest animals - including possums, mustelids, cats, rats and goats; and

· Maritime invaders – such as sea squirt. The following new invertebrates were identified in Northland in 2008-2009: 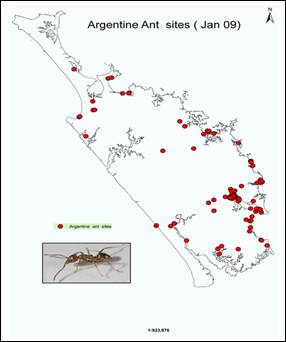 Few realise it but Northland is a battleground for a largely unseen war between a host of tiny insects and fungi and some of the region's worst weeds. In the last five years alone, 49 releases of different ‘biocontrol' agents have occurred in Northland to help control weeds such as Californian, nodding and Scotch thistles, alligator weed, broom, gorse, mistflower and ragwort.

Before bio agents can be released into New Zealand, there is a rigorous process of trial and experimentation overseen by the Environmental Protection Authority (EPA). Imports are strictly controlled and scientists can take several years to satisfy the risk assessment criteria and complete trial work. This is to ensure that the bio agents don't pose a risk to New Zealand's native plants or animals.

The only new biocontrol agent introduced in Northland in 2008-2009 was the buddleja leaf weevil, which was released in a trial to control buddleja near Kaikohe. This trial will be monitored closely and if successful, may be rolled out to other locations in the region.