NRC maintains a comprehensive network of hydrometric stations. These can record rainfall, water level, water flow and climate. Monitoring and obtaining information about Northland's climate and water resources is important so that short and long term changes can be detected.

Hydrometric stations have been sited to provide region-wide coverage. Stations also target key river systems so that they can be used for flood warning purposes and for low water flow monitoring.

During the 2007-08 financial year, NRC's rainfall monitoring network consisted of:

In this financial year, new telemetered rain stations were installed at Wilson's Dam (Waiwarawara Stream catchment, west of Ruakaka) and at Opua Wharf.

From July 2007 – June 2008, there was a 0.9% loss in data from the 30 automatic rainfall stations (compared to 0.5% from 23 stations in the previous year). This can be attributed to faulty instrumentation. NRC operates seven automatic water level stations in tidal environments. These are located on the east coast at Rangaunu Harbour, Whangaroa Harbour, Opua, Marsden Point and Whangarei City and on the West Coast at Pouto Point and Dargaville. Water levels are continually recorded at either five minute (Whangaroa, Marsden Point and Pouto) or 15-minute intervals (Rangaunu Harbour, Opua, Whangarei City and Dargaville) over the full range of tidal cycles. Barometric pressure, wind speed, wind direction and rainfall are also measured at the Dargaville station and barometric pressure at Pouto Point.

During periods of extreme high tides, there is potential for flooding in low lying coastal areas and Dargaville Township. During such an event, water level, wind and barometric information is gathered via the telemetry system and regularly forwarded to the NRC Emergency Management Officer. 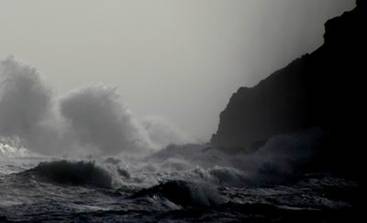 Photo: Stormy seas on the west coast of Northland

During 2007-08, as part of river hazard management, four new telemetered water level stations were installed in the Kaeo River catchment. These stations will provide water level and flow information to improve flood modelling for the Kaeo River Management Plan and will allow for improved flood warning in Kaeo. The water level stations are located at Waiare Road, Kaeo Fire Station, the outlet into Whangaroa Harbour (tide effected) and at the Big Game Fishing Wharf in the Whangaroa Harbour (tidal).

In 2007-08, new telemetered water level/flow stations were also installed in the Waipoua River and the Hatea River, at the Whangarei Town Basin. The Waipoua River site will measure natural water levels and flows in one of Northland's most important, pristine river catchments. The Whangarei site will measure tidal water levels and freshwater inflows to the Town Basin during heavy rainfall events. Information from this station will be used to better predict flooding of the central business district (CBD). 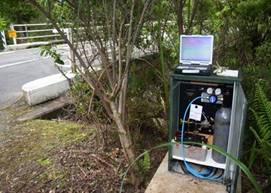 In addition to measuring water level, three of these groundwater stations also measure conductivity, which is a measure of saline (saltwater) intrusion, and temperature. These stations are sited at Mangonui, Russell and Ruawai. For more information on groundwater monitoring, please refer to the Groundwater section of the Annual Monitoring report 2007-08.

Stations operated by NIWA and the MetService in Northland complement the NRC's hydrometric network. In 2007-08, these included: