The graph below shows that the most common air related incidents in 2007-08 were those related to burning and smoke nuisance. These were followed by odour, dust nuisance and spraydrift incidents. In addition, there were a total of 3 abrasive blasting incidents reported and several "other" incidents affecting air, including the discharge of farm dairy effluent (FDE), sewage or other hazardous substances in a manner by which it impacted upon air quality. 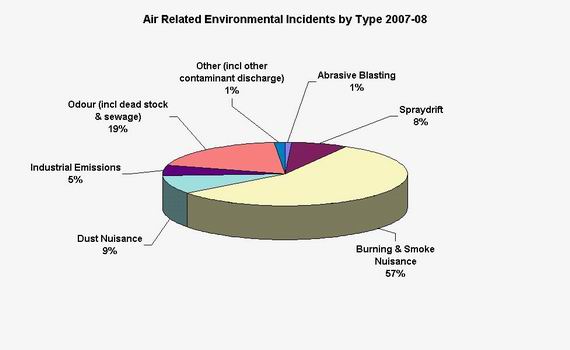 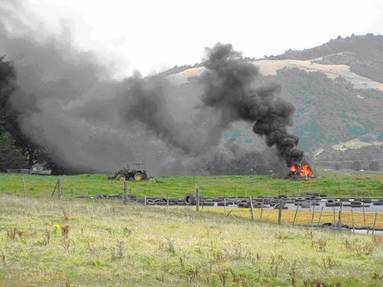 The different incident types affecting inland waters have been grouped into categories as shown below. The water pollution/contaminated discharge group includes incidents such as contaminated stormwater, discolouration/foam or scums and oil and diesel spills. Diversion and drainage work, water abstraction, flooding hazard and erosion incidents have been grouped together as they are all related to water quantity and/or flow rates. Incident types where one of the main concerns is bacteriological contamination and the associated human health risks have been grouped, including sewage, dead stock and discharge of FDE. Discharge of FDE to land causing ponding of effluent

The different incident types affecting land resources in Northland have been grouped as for inland waters. For example, all incidents associated with potential bacterial contamination are grouped, including sewage, FDE and incidents involving dead stock. Earthworks on a slope without sediment control

The RMZ is a zone of varying widths adjacent to the bed of a river, lake, indigenous wetland, or the CMA, which requires careful management to protect the water body from the adverse effects of land use. This "resource affected" area was introduced for incident reporting on 1 July 2005. The introduction of this additional area will therefore have had an impact on incident numbers that would previously have been logged as affecting either land or the CMA. 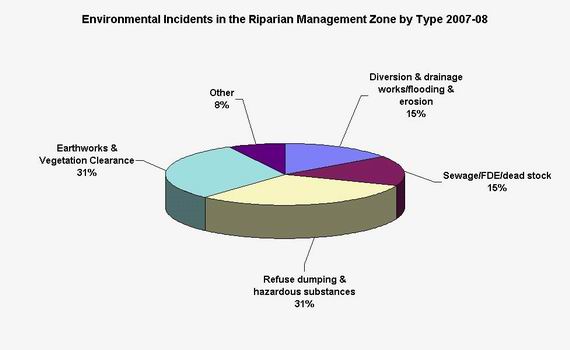 There were 26 incidents reported as affecting the RMZ during 2007-08. The majority of these incidents were earthworks and vegetation clearance or refuse dumping and hazardous substances. This compares to 24 incidents recorded in 2006-07. Rubbish and debris pile in the RMZ

The CMA covers harbours, beaches and estuaries and includes the foreshore, seabed, water and air space above the water. There were 213 incidents reported in 2007-08 that were recorded as affecting the CMA, of which 30% were described as "other coastal activities". This category includes a range of incidents from livestock on beaches, to mangrove clearance or alleged sand extraction or deposition. The number of incidents recorded as affecting the CMA has stayed reasonably stable for the last four years, with approximately 100 reported to NRC every year. However, there was an increase to 213 in 2007-08 due to a number of structures being investigated through routine coastal structure monitoring and because incidents previously recorded as affecting coastal waters have now been integrated into this category.