Over the summer of 2007-08, a ‘Vehicles on Beaches' education campaign was run in Northland with the aim of raising awareness about the dangers and potential environmental impacts of driving on our beaches. The campaign included inter-agency information days at popular beaches in the region, radio and newspaper adverts and the distribution of a revised ‘Driving Safely on the Beach' information leaflet.

As part of the campaign, a survey was conducted to ascertain whether or not people felt there was an issue with vehicles on beaches and if yes, what people felt local councils should do about the issue. The majority of those surveyed felt that speed was a key issue and most respondents felt that speed limits should introduced and enforced. Very few of those surveyed felt that vehicles should be banned completely, although some people felt that they should be restricted to certain areas.

Following on from this campaign, NRC and the District Councils have been working together to develop a strategy for managing vehicles on beaches. Significant progress has been made in the Whangarei and Kaipara Districts. A different management approach has been developed for each district but both strategies achieve an improved management regime, which provides for increased safety for beach users.

Whangarei District Council (WDC) will introduce a bylaw to restrict the speed of vehicles driving on the beach at Bream Bay. The aim is to have this bylaw in place by Christmas (December) 2008. In the Kaipara District, the Department of Conservation (DOC) has agreed to take on the implementation of a bylaw restricting speed on a selection of beaches in the district. Consultation on this will take place over the summer of 2008-09. The Far North District Council has not yet developed a management regime for vehicles on beaches in their district.

Funding has been approved by Land Transport New Zealand (LTNZ) to continue the education campaign over the summer of 2008-09 and for advertising and signage for the newly introduced speed restrictions. 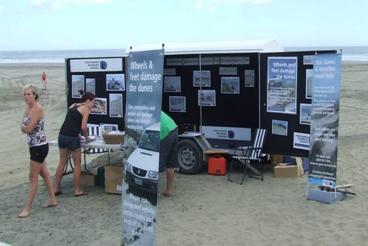