The Waipapa River originates in and flows through Puketi forest in central Northland, meandering through farmland until it reaches the upper Hokianga Harbour. The sampling site is within the forest and therefore the catchment is predominantly indigenous forest with some small areas of exotic forestry in the headwaters. The geology of the Waipapa River is soft sedimentary (siltstones and mudstones). Similarly to the Waipoua River site, this site on the Waipapa River is near pristine condition. The Waipapa site is one of four sites in Northland that are part of the National River Water Quality Network administered by NIWA.

The 2005-2006 results for the Waipapa River site are summarised in the table below including the median, range and percentage of sampling occasions that comply with relevant guidelines. Note: Nutrient results were only available for seven sampling occasions (July 2005 – January 2006), except for total phosphorus and nitrogen and the results for June 2006 where not available at the time of data analysis. Medians shown in red are outside the recommended guidelines.

The 2005-2006 results show that the Waipapa River remains in a relatively pristine state. With the median of all parameters, except dissolved oxygen (% saturation) meeting relevant guidelines and five parameters complying with their respective guidelines on all 11 sampling occasions; dissolved oxygen (mg/L), total phosphorus, ammoniacal nitrogen, total nitrogen and pH.

For results from October 1996 to May 2006, there were significant decreasing trends for dissolve reactive phosphorus, ammoniacal nitrogen and nitrate in Waipapa River. There is also an increasing trend in pH; however it is not known whether this is a deterioration or improvement at this stage. 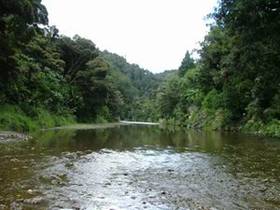 Waipapa River through the Puketi Forest.