The Mangakahia River originates from native bush near Waipoua Forest flowing southwest until it reaches the Wairua River. There are two sites on the Mangakahia River; one mid catchment at Twin Bridges and the other at Titoki Bridge in the lower reaches. By the time the Mangakahia River reaches the settlement of Titoki, land use is predominantly beef and dairy farming, still with an underlying geology of acidic volcanics. Riparian management along the lower Mangakahia varies in quality, from quite dense to non-existent. This site is one of four sites in Northland that are part of the National River Water Quality Network, administered by NIWA.

The 2005-2006 results for the Mangakahia River site at Titoki Bridge are summarised in the table below including the median, range and percentage of sampling occasions that comply with relevant guidelines for the 12 sampling occasions. Note: Nutrient results were only available for seven sampling occasions (July 2005 – January 2006), except for total phosphorus and nitrogen, and the results for June 2006 where not available at the time of data analysis. Medians shown in red are outside the recommended guidelines.

The 2005-2006 results indicate that the Mangakahia River has moderate water quality by the time it reaches Titoki. The median E. coli and dissolved oxygen (% saturation) results for 2005-06 do not meet their respective guidelines. The peaks in bacterial contamination could be related to increased flow; however, when flows get extremely high there could be a dilution effect occurring, as bacterial levels are a lot lower than for moderate increases in flow.

Trend analysis on data from October 1996 to May 2006 shows there are decreasing trends in dissolved reactive phosphorus and nitrate at the Titoki site but not in total nitrogen or phosphorus. 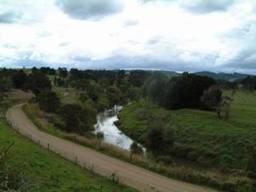