In February 2006, NIWA carried out aquatic vegetation surveys on 11 Northland lakes; five of which had not previously been surveyed. The LakeSPI method of assessing the ecological condition of a lake was carried out on eight of these 11 lakes along with wetland vegetation descriptions, and fish, bird and invertebrate observations. Reconnaissance surveys and vegetation descriptions were carried out on the other three lakes. The LakeSPI index score is a measure of how close a water body is to its potential un-impacted state i.e. the closer the LakeSPI score is to 100% the less impacted or more pristine the lake is.

NIWA found that the LakeSPI index score for the resurveyed lakes (Lakes Morehurehu, Morehurehu South, Ngakeketa North and Waihopo) were similar. Lakes Owhareiti, Te Riu, Waingata and Waro had LakeSPI index scores of 16%, 96%, 80% and 50%, respectively. Reconnaissance surveys were carried out on Lakes Ora, Te Arai and Te Kahika. Lake Ora and Te Arai were given a low ranking due to low water clarity and the absence of submerged aquatic vegetation. The photo below shows NIWA staff getting ready to undertake a survey of the lake vegetation in Lake Owhareiti. 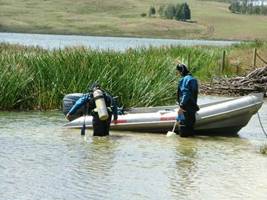