The Northland Regional Council operates a radio and cellular phone telemetry network comprising of 17 rainfall and 27 water level stations from the hydrometric network. These telemetered sites provide a real-time picture of the state of Northland's water resources during both drought and flood conditions. The map below shows all the telemetered hydrometric stations operated by NRC in Northland including those operated by NIWA, Whangarei and the NZ MetService.

During periods of extreme rainfall, the telemetered sites play an important role in ensuring that both the Civil Defence and the public are kept informed (via media releases) of flooding in Northland. During periods of drought, water levels are monitored and, when a low threshold is reached, a low flow-gauging programme is undertaken in the affected river catchments. These manual measurements enable the flow to be accurately determined and are used to monitor water usage. During 2005-06, a total of 124 flow measurements were carried out in the region, mainly between low and mean flows with the exception of a series of flood gaugings carried out in the Awanui catchment for flood modelling purposes. The photograph below shows flood gauging in Awanui River in November 2005. 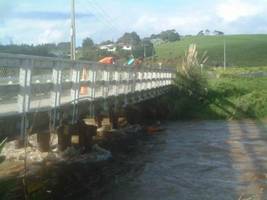 Future Additions and Changes to the Telemetry Network

A new telemetered rainfall station is to be installed on the east coast at Oakura Bay. At present rainfall data coverage in the east coast area of Oakura and Helena Bay is not adequate. Considerable spatial variation exists between the closest inland rainfall station (at Puhipuhi) and the sites monitored as part of the summer recreational bathing water quality sampling programme. In order to adequately interpret the water data from these bathing sites, accurate local rainfall data is required.

Four hydrometric water level stations will be upgraded to telemetry next financial year. These include stations on the Rangitane, Waiharakeke, Hikurangi, Waihoihoi and Waionehu Rivers. New telemetered dataloggers will be installed at the Marsden Point tide station and at the water level stations on the Mangakahia and Ngunguru Rivers. A cellphone telemetered rainfall site is to be installed at Opononi to provide better regional coverage of rainfall distribution patterns during high intensity rainfall events.

The Northland Regional Council has a comprehensive database for storage of hydrometric data, which includes rainfall, water level, flow and some climate data. Data is stored as time dependent data (TIDEDA) on the council archive and is available for use within three months of collection. Data from the Northland Regional Council's hydrometric database is transferred to the NIWA National Hydrometric Database in Christchurch on an annual basis.

All hydrological monitoring and data recording conforms to the ISO 2000/9001 Quality Management System. This system has been adopted to ensure that all hydrological data supplied to both internal and external clients is "confidently useable". This means data may be used for resource management, engineering design, project operation, or scientific investigations without the need for extensive checking, editing and correction. An external audit is carried out at six monthly intervals.