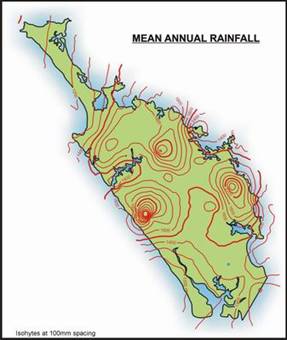 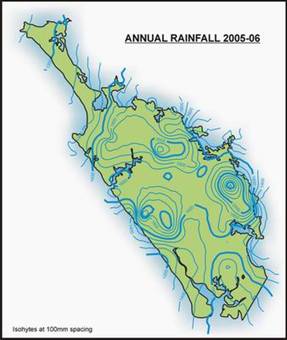 Northland experienced a range of climatic patterns during the year varying from a record dry August, a dry November and February to very wet conditions in July, January, March April and May.

During winter there were extremes in weather patterns. In July, high rainfall intensities between 35 mm/hr and 53 mm/hr were recorded at Puhipuhi and Mangawhai (Tara) as a result of a slow moving northerly front. Conversely, August was the driest since 1981, receiving only 43% of the expected rainfall. More information on the hydrological conditions in July and August 2005 is documented in case study one (refer page 12).

During December rainfall amounts were slightly below normal. Two north easterly fronts produced isolated, heavy rainfall during mid December and late January. There was a relatively stable period of fine weather between these events. February was relatively dry where rain fell over an average of 6 days during the month.

Northland experienced a wet autumn, commencing with two severe weather warnings issued by MetService during March. The remnants of Cyclone Whati brought storm force easterly winds and persistent rain to the Northland region over two days. Well above average rainfall was recorded for April with rain falling over 22 days during early, mid and late April. On 24 April, intense rainfall of up to 112 mm over six hours and a maximum of 34 mm/hr caused severe flooding on SH1 at Rangiahua and SH10 at Kaeo. Flood warnings were issued. May was also wet, with rain falling over 22 days. By contrast, June rainfall was below normal, however, frequent cold southerly winds were predominant bringing very cold conditions to the region. More information on the hydrological conditions in autumn is documented in case study three (refer page 15).

Northland is characterised by a large number of small catchments and short, meandering streams of gentle slope. Most of the major rivers flow into estuarine environments rather than directly to the open coast. These rivers and streams play an important role in Northland, often providing water for stock, industry and domestic use.

Climate and geology influence the flow regimes of Northland's rivers. Northland's marked seasonal rainfall pattern is reflected in the broad pattern of higher flows during winter months and lower flows during summer months. Most rivers flow at only 10 - 20% of their yearly average flow in summer.

Droughts occur as a result of lower than usual rainfall causing prolonged periods of unusually low river-flow. During drought months (most typically January to March) more accurate monitoring of stream flow is undertaken to establish levels at which water use restrictions may occur.

Northland rivers in 2005-2006 were characterised by below average monthly flows during August, September, November and December. Lower flows were recorded in the far north areas compared to elsewhere. From January through to June, river flows were generally average or above average as shown in the figures below. The figures on the next page show the mean monthly flow in 2005-06 (blue bar) compared to the historical mean monthly flow (red line) for various rivers in Northland.