The Northland Regional Council operates a hydrometric network (refer page 2) consisting of river, groundwater, tidal and lake water level and rainfall stations throughout Northland. There are a total of 200 stations on the hydrometric network of which 63 are automated, while the rest are manually read. Of the 63 automated stations 39 (62%) are on a radio/cellphone telemetry network (refer page 5). These networks and the work of the Council's Hydrology team met relative performance targets (refer page 17) in 2005-2006.

In the 2005-2006 financial year two new telemetered water level stations were installed. These included one in the Kaihu River catchment at Parore to record flood levels and flows in the lower Kaihu River, and the other in the Victoria River catchment north of the Mangamuka Hills to enable flood modelling to be carried out for the Awanui River Management Plan as well as provide improved flood warning capabilities for Kaitaia.

River flows (refer page 10) in 2005-2006 were characterised by below average monthly flows during August, September, November and December. Lower flows were recorded in the far north areas from November to February than elsewhere in the region. Near average to above average flows were recorded in July, October and January through to May. 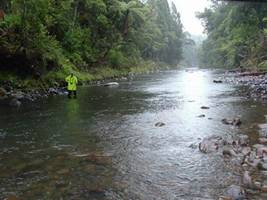