With over 3000 kilometres of coastline and 30 coastal settlements, Northland's exposure to tsunami hazard is high. However, there are a number of critical unknowns about tsunami hazard such as the record of historic/pre-historic events and significance of tsunami generating sources.

As a basis to further understanding these unknowns, National Institute of Water and Atmospheric Research (NIWA) were engaged to investigate these factors, with a view to using the information gained from this study for modelling of shoreline tsunami wave height and inundation for Northland's coastal settlements in coming years.

A comprehensive literature review of the pre- and post-historic tsunami record for the Northland region and a ground truthing field assessment of representative sections of the Northland coastline, with sediment coring in selected areas, were undertaken by NIWA with contributions from ArchResearch (Bruce McFadgen) and Northland Regional Council (Bruce Howse and Clarie Nyberg).

The post-historic record shows that there have been four moderate tsunami inundation events on Northland's east coast in the last 150 years. Whilst the paleo-tsunami record indicates there has been at least one large event, or a series of large closely-spaced events, in the last 600 years.

The full report ‘Tsunami hazard assessment baseline for the Northland region' by Change-Goff and Goff (2006) is available on the NRC website as a pdf file in the coastal section of the 2005-06 Annual Monitoring Report.

Key findings from the comparison of the historic and paleo-tsunami records indicate: 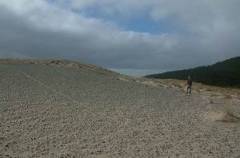 The photograph shows a Paleo-tsunami deposit up to about 35 metres amsl at Tom Bowling Bay. 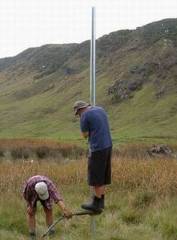 The most significant tsunami generating sources were identified and wave-height at shoreline modelled at a regional scale for a large generational event. These included a distant source from South America, distant/regional tsunamis from the Solomon Sea and New Hebrides areas, a subduction zone event along the Tonga-Kermadec Trench. Selected local sources were also identified and modelled for Northland, namely submarine landslides near Three Kings Islands and northeast of North Cape and a slump of the continental shelf near the Rapuhia Scarp.

A subduction zone event along the Tonga-Kermadec Trench represented the most significant tsunami source, with water elevation at shoreline exceeding 5 metres for a ‘maximum event' scenario. Other distant/regional scenarios for South America, Solomon Sea and New Hebrides sources generated water elevations at shoreline around three metres. Of note, was that the Northland region records the highest elevations from all distant/regional sources, with a marked signal also noted along the western shoreline.

Modelling of local sources indicated water elevation at shoreline exceeding 10 metres at a number of locations, although maximum elevations were more spatially restricted to near the area of generational source than those for regional/distant source events.

The distant/regional scenarios modelled indicated that the Paleotsunami evidence for Northland could not have been deposited as a result of these scenarios, showing that unknown or poorly studied local sources were the cause.