One of Northland's most treasured natural resources is our expansive, diverse and beautiful coastline, over 3000 kilometres in total. The Northland Regional Council produced a Regional Coastal Plan, which became operative in 2004. This plan outlines the rules and regulations regarding what people may and may not do, in terms of activities that can have an impact on coastal areas.

As our coastline is so large and valued it is not surprising that the Northland Regional Council carries out a considerable amount of coastal monitoring in a range of areas such as:

Check out the performance targets to find out which community outcomes in the Long Term Council Community Plan relate to coastal monitoring. 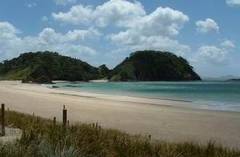 In February 2006 the Regional Council assisted with a Ministry for the Environment project which involved resurveying for antifouling co-biocides at selected sites in Northland. This followed on from the 2003 national survey. Measurable concentrations of the co-biocide Diuron was found at sites of high density moorings, while there was no Irgarol 1051 detected at the selected sites in Northland.

In 2005-06 the coastal team implemented the Estuarine Monitoring Programme, using the national Estuarine Monitoring protocols, in Whangarei Harbour and Ruakaka Estuary. This involved monitoring of both fine and broad scale habitat characteristics such as faunal and floral composition, nutrient sampling, sediment particle size and the proportion of different habitat types including substrate type and vegetation cover. Results indicate that both estuaries are moderately enriched with low to moderate microalgal mat development. Sand was the dominant substrate for both estuaries, while faunal and floral abundance and extent was relatively variable for the two estuaries.

With over 3000 kilometres of coastline and 30 coastal settlements, Northland's exposure to tsunami hazard is high. However, there are several critical unknowns about tsunami hazard such as the record of historic/pre-historic events and significance of tsunami generating sources. In 2005-06 a comprehensive literature review of the historic tsunami record for the Northland region and a ground truthing field assessment of representative sections of the Northland coastline, with sediment coring in selected areas, were undertaken by National Institute of Water and Atmospheric Research (NIWA) staff with contributions from ArchResearch and the Regional Council.

The beach-profile monitoring programme was continued in 2005-06 to provide information on the positional stability (i.e. eroding, equilibrium, accreting) of the foreshore and foredune at selected coastal areas. For the majority of east coast sites, results tend to indicate that foredunes have continued to accrete sand and grow seaward under the existence of favourable ‘dune building' conditions, which have tended to dominate since the easterly storms in July 2000. The exception is those areas where historically the foredune complex has been extensively modified and native foredune vegetation removed. A storm event in September 2005 affected several coastal areas in Northland.

In response to increased pressure from coastal development, hazard management issues and the establishment of coast care groups, the Northland Regional Council has sought to develop a coast care programme. The aim of this programme is to enable communities to better understand coastal processes and initiate protection, restoration and enhancement of dune ecosystems through the establishment and resourcing of community based coast care groups. The photograph below demonstrates the damage humans can have on coastal dunes showing vehicle damage to dunes on the West Coast. 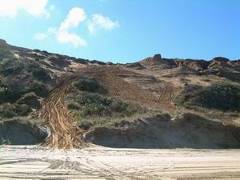