In many places the coast is the first line of defence between the land and the sea with dune systems providing an effective buffer protecting land and infrastructure from coastal erosion and flooding. Since habitation by humans, and particularly within the last 150 years, the dune environment has been degraded through inappropriate coastal development, farming practices, the introduction of pest species, sand extraction and damage by pedestrians and vehicles. The photographs below are an example of coastal development impacting on a dune system, showing Paihia Waterfront in 1953 (left) and in 2006 (right). 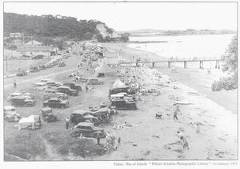 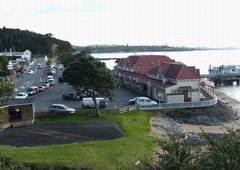 In areas where the front of the dune (foredune) has been extensively modified and native vegetation such as pingao and Spinifex sp. have been removed, the dunes have lost their ability to rebuild such as at Tauranga Bay shown in the left photo below. Loss of sand from the dune system over time leads to long term retreat of the foredune. When the sea threatens land and infrastructure the typical response has been to armour the coastline with hard materials such as rocks, concrete rubble, steel and iron which lowers the beach profile causing the high tide beach to be lost and subsequently degrading natural character such as at Rangiputa in the right photo below. 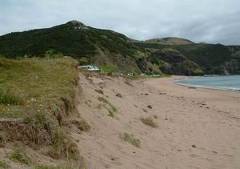 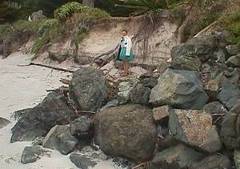 In response to increased pressure from coastal development, hazard management issues and the establishment of coast care groups, the Northland Regional Council has sought to develop a coast care programme. The aim of this programme is to enable communities to better understand coastal processes and initiate protection, restoration and enhancement of dune ecosystems through the establishment and resourcing of community based coast care groups.

Coast care is not a new concept with groups being established in Australia since the 1980's and in New Zealand since 1993. The fundamental concept of coast care is to enable volunteers to become involved with the management and protection of the coast bringing people, organisations and the environment together. Projects undertaken by coast care groups include dune rehabilitation, fencing, signage, beach access, weed management, pest control, planting, public education, beach clean ups and general awareness of coastal issues. The photographs below show work that has been carried out at Matapouri Bay, including planting, fencing to protect the dunes, a walkway and signage to educate beach users. 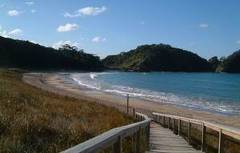 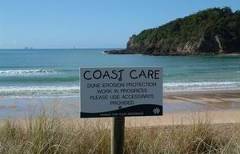 Already some coast care groups and District Councils have been effective in protecting and restoring dune systems in Northland as in the Matapouri Bay example above. The Glinks Gully Protection Society have concentrated their efforts in restoring the back dune area, by inviting the community along to planting days. Further up the coast, members of the Hua Rakau Ki Omamari Trust have established a nursery where native plants are grown and then planted on the foredune and back dune. The trust members have protected the dune plants by constructing brush fences, erecting signage and carrying out pest management. The trust is now concentrating on the restoration of the Omamari Stream to improve water quality.

On-going coastal erosion at Omapere Beach has seen the formation of the Hokianga Harbour Foreshore Restoration Society. The society aims to protect land and infrastructure from coastal erosion while maintaining a high tide beach for recreational use. The society is currently working with the local residents, the Regional Council and Far North District Council to facilitate an appropriate solution to erosion issues.

Residents at Waipapakauri, faced with sand inundation by a dune blow out, have constructed a walkway over the dunes to Ninety Mile Beach, erected signage and fences and planted pingao plants on the seaward side of the dune. Members of the Kaimaumau Coastal Reserve Group have begun to develop Far North District Reserve land at Kaimaumau by clearing some pest plant species and planting suitable back dune plant species. This group also aims to restore the compromised dunes by the reserve by recontouring the dune face, planting and fencing, erecting signs and developing a parking area on the reserve. The group is also working on the protection and enhancement of the Kaimaumau Wetland which is recognised as one of New Zealand's significant indigenous wetlands.