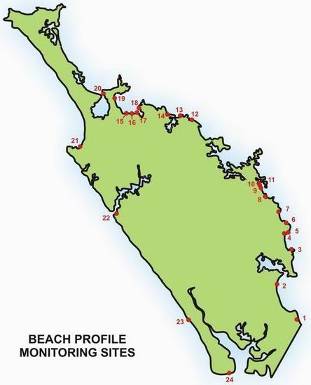 The beach-profile monitoring programme continued in 2005-06. This programme was established to provide information on the positional stability (i.e. eroding, equilibrium, accreting) of the foreshore and foredune or cliff at selected coastal areas. Data gathered from this programme is necessary to better understand the dynamics of Northland's coastline assisting the Council and community in assessing the suitability and effect of developments in and adjacent to coastal areas. It is also used for the delineation of coastal hazard zones.

The programme involves surveying the position of the toe of the foredune with a differential global positioning system and surveying one or more cross sectional profiles of the foreshore and foredune complex at each beach. The programme was designed to provide coverage of a number of key ‘monitor' beaches in the region. The monitoring is either done twice a year in summer and winter, once every two years or after events that cause substantial changes to the position of the shoreline such as storms and landslides. The table below shows what beaches are monitored, for how long they have been monitored and the frequency of monitoring.

The photographs below of Bream Bay on the east coast of Northland highlight how the foredune can change. The left photo was taken in July 2000 following a period of sustained onshore winds that caused substantial erosion to a number of east coast beaches, while the photo on the right is from December 2005 following a period of calmer conditions enabling formation of incipient foredune and accumulation of sand on the beach. 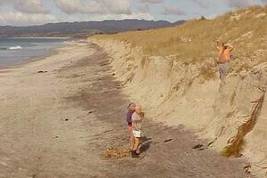 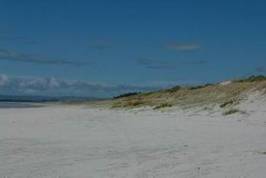 For the majority of east coast sites, results tend to indicate that foredunes have continued to accrete sand and grow seaward under the existence of favourable ‘dune building' conditions, which have tended to dominate since the easterly storms in July 2000.

The exception is those areas where historically the foredune complex has been extensively modified and native foredune vegetation, such as pingao and spinifiex, removed. The foredunes of these areas have largely disappeared and lost the ability to retain sand and rebuild during favourable conditions. This causes the cut part, of the cut and fill cycle (the erosion and accretion cycle), to dominate, resulting in net negative retreat of the foredune. Examples of these areas include Tauranga Bay beach (shown in the photo below), parts of the Omapere foreshore, although this case is further affected by inappropriate coastal structures interfering with sand transport, Waipu Cove and the estuarine end of Matapouri Beach.

Tauranga Bay is an example of a beach with a highly modified foredune as shown in the photograph below (March 2004). The foredune continues to show net negative retreat due to modification of the dune complex, exclusion of suitable native foredune vegetation and lack of appropriate pedestrian access to the beach.