Groundwater resources in Northland vary in both quantity and quality, depending on the geology of the aquifer system. The main aquifer systems exist in the basalts such as Kaikohe and Whangarei, and in the Aupouri sands. There are also many other smaller sand and gravel coastal aquifers, and generally less productive greywacke aquifers throughout the region. Rainfall is the main recharge source for Northland's aquifers.

Groundwater level monitoring was carried out in the past year at 75 sites throughout northland to provide information to monitor the effects of climate, land use change and groundwater abstractions. Low groundwater levels were recorded at many sites from Kaikohe to Mangawhai as a result of low rainfall recharge in 2004-05, however these groundwater levels have recovered to near average during 2005-06.

Specific groundwater investigations were undertaken in the Ruawai, Taipa, Russell, Awanui and Mangonui areas. Areas of saline (saltwater) contamination have been discovered at Ruawai, elevated nitrate levels still occur in a number of bores in Taipa, and monitoring at Russell has indicated bacterial contamination and the increased risk of saline (saltwater) contamination. Up-to-date groundwater level and saltwater contamination information is available for the Russell area. A bore close to the foreshore at Mangonui is also being monitored for saltwater contamination. The Awanui area is currently being studied to assess the effects of free-flowing artesian bores on the surrounding groundwater resource. Age testing of groundwater in five bores was also carried out in 2005-06.

Hydro-geological investigations were carried out in three ‘at risk' aquifers; Kaikohe, Three Mile Bush and Maungakaramea to review sustainable yields of these aquifers. The Kaikohe investigation indicates additional work is required to better understand recharge to the Kaikohe aquifer. This work will be undertaken in the 2006-07 year. Future groundwater investigations will include reviews of sustainable yields in three coastal aquifers, yet to be selected.

Compliance monitoring includes the monitoring of bore construction for bores that require a bore permit and monitoring of groundwater take resource consents. During 2005-06 there were only minor non compliances with bore construction permits and no formal enforcement action was taken against groundwater take consent holders. The Regional Council established a pumping test programme in 2005-06, with the objective to determine the characteristics of groundwater in different aquifers in Northland.Groundwater Level Monitoring Groundwater levels in June 2005 were at or near the lowest recorded levels for the past 16 years in the Kaikohe, Whangarei and Mangawhai areas as a result of low rainfall recharge in 2003 and 2004, particularly during the winter months. Groundwater level monitoring in these areas indicates that water levels have recovered during 2005-06.

Groundwater level results for the 2005-06 financial year are presented below for several aquifers monitored throughout Northland. In most cases historical water levels are provided for comparisons.

As expected, groundwater level is generally highest from July to September and then drops during the summer months as shown in the graph below for Poroti West monitoring bore in the Whangarei basalt aquifer. Note: the vertical axis of the graph is depth below ground level in millimetres. 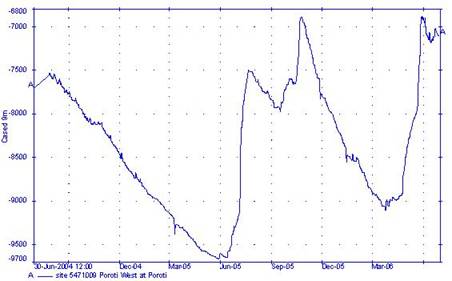 Rainfall for the 2005-06 monitoring period in the Tara/Mangawhai area has been above average for the months of April and May. Groundwater levels in the Mangawhai area generally increase to a recharge peak around October as a result of the delay between rainfall events and the actual recharge of the groundwater resource. Note: the vertical axis of the graph is depth below ground level in millimetres. The Aupouri aquifer has a large storage capacity. The large volume of water in storage within the deep sand and shell bed aquifer buffers the effects of rainfall recharge. The decline in the water level in the Hukatere Forest monitoring bore from 1987 to 1996 (shown in the graph below) is likely to be a result of less than average rainfall in the late 1980's to early 1990's, and the effects of plantation forestry reducing recharge to the system. Felling of the forestry and increased rainfall is likely to have resulted in the increase in groundwater levels recorded from 1998 to 2004. Over 2005-06 groundwater levels have been on the decline again. Note: the vertical axis of the graph is depth below ground level in millimetres. 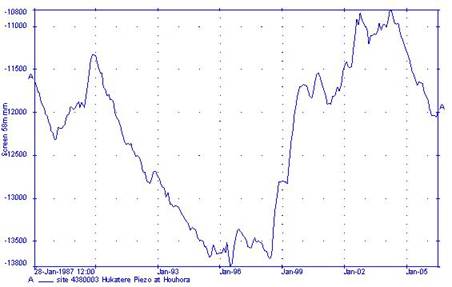