The Northland Regional Council maintains a bore log database. All the bore logs provided by drillers are incorporated in this database.

Bore permits (resource consents) were not required for drilling activities prior to 1 April 1999. Since April 1999, bore permits have been required prior to drilling in sensitive groundwater areas identified in the Regional Water and Soil Plan for Northland as ‘at risk' aquifers or if drilling in contaminated areas.

In April 2006, the Regional Water and Soil Plan for Northland Plan Change 1 was notified and included the requirement for bore permits (resource consents) for all drilling activities (aside from temporary bores) throughout the Northland Region. Hearings for the submissions on this Plan Change 1 will be held in September 2006.

There were 90 bores registered on the bore log database in 2005-06, 45 of these bores were consented. The graph below shows the total number of bores drilled every financial year since 1997 including the proportion of consented to non consented (permitted activity) bores.

There is an increase in the number of drilling activities that require a bore permit (resource consent), particularly in 2001-02. This is likely to be a result of increasing subdivision and water intensive land use activities in the areas which require bore permits, as well as three additional ‘at risk' aquifers being included in the Regional Water and Soil Plan in 2002.

The graph below summarises the purpose of the bores registered on the database since 1997, showing that there has been an increase in the number of bores drilled for purposes other than stock and domestic use. For example bores installed for irritation purposes.

Bores which require a bore permits are visited by a Regional Council monitoring officer to ensure that the bore is constructed and completed in accordance with the conditions of the consent. Of the 45 consented bores constructed in 2005-06 only minor non-compliances with bore construction were identified. The minor non-compliances include bores lacking a concrete pad, a 30 cm high casing or removable cap and access point where water level readings can be taken. No formal enforcement action was taken in 2005-06 with respect to bore construction.

The photographs below show a poorly constructed and maintained bore (left) and the correct construction of a bore (right) including a concrete pad, 30 cm high casing and removable cap. 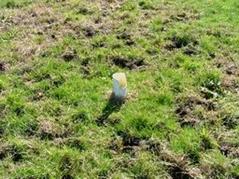