In 2005-2006 the regional council developed a wetland monitoring programme and was involved with many landowner and community groups that are carrying out work to enhance biodiversity in Northland. In October 2005 $300,000 was allocated to landowners and groups through the Environment Fund for environmental and enhancement projects. Over 90 projects received funding, including general restoration, wetland protection, pest control, revegetation and dairy farm Clean Stream Accord projects. 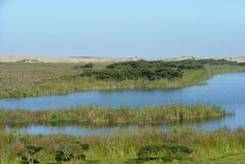 Lake Karaka on the Pouto Peninsula, which is one of many relatively pristine dune lake wetland systems found in Northland.

The Council has developed a wetland assessment field form which uses a scoring system to rank and describe wetland areas on private land. Data recorded during the survey will be entered into a wetlands database. Twenty high value Northland wetlands have been selected in consultation with the Department of Conservation (DOC) and District Councils for initial assessment and ongoing monitoring.

A number of landowners and community groups have received technical advice for restoration, protection or replanting programmes including projects at Poroti Springs and Lake Omapere. The NRC has also been active in advocating protection of biodiversity at field days, shows and a wetland workshop at Waimate. NRC biodiversity staff have also participated in a number of assessments for proposed QEII covenants as well as assessments of areas containing significant habitats as part of subdivision proposals. Public enquiries about biodiversity are an indicator of increasing awareness and concern about environmental issues. At least 60 enquiries related to biodiversity were responded to in 2005-2006.

FORMAK is a national biodiversity monitoring method which enables landowners and communities to asses the condition and monitor the recovery of native forest and forest biota. FORMAK data can be input into an online national database and is being used in Northland to asses Community Pest Control Area Projects. Training for 14 participants was held in Northland this year. NRC is part of both a Regional Interagency Team and a National Interagency Team exploring ways of coordinating and expanding the use of FORMAK throughout New Zealand. Potentially FORMAK can be used for State of the Environment Monitoring and if used nationally will be a very powerful monitoring tool.

Northland has one of the most extensive lists of nationally threatened species of any region in New Zealand. It is important that species on this list are monitored and records kept so that the status of each species on the list can be tracked into the future. Staff have contributed a number of threatened species site records (both new and repeat records) to a national database. This database is used by a national committee to review the status of all species every two years.

NRC along with DOC and Auckland Museum botanists have assessed and ranked every native plant species known from Northland and developed a draft list of plants which are rare or regionally significant. This includes plants both on the nationally threatened list as well as plants which may be common elsewhere but are rare in Northland. This list will be sent out for public comment and will help guide landowners and agencies especially in land protection and planning matters. 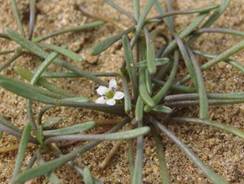