The NIWA long term forecast indicates the winter temperatures are likely to be warmer than average (60 %) due to warmer than average sea surface temperatures and the continuation of La Niña. Cold snaps are likely to be less frequent and of shorter duration than expected. Rainfall, soil moisture and river flows are expected to be “Above Normal” (50 – 55 %) with sub-tropical moisture plumes causing heavy rainfall and potential flooding in Northland. For more details, please refer to NIWA’s seasonal climate outlook for June-August 2022:

NIWA Temperature, Rainfall, Soil Moisture and River Flows probabilities for the period of June 2022 to August 2022

Rainfall in May 2022 was generally drier than usual, with only two large rain events during the month, resulting in intense thunderstorms along the east coast, bringing the average rainfall in Northland to 75% of what was expected. Only Marsden Point exceeded the expected rainfall (122%), and only five sites reached 100%.

Many sites recorded below 50% of their expected rainfall, the lowest being recorded at Pouto Point with only 35% of what was expected. For autumn (March – May) there was a distinct difference in rainfall between the east and west of Northland. The east coast exceeded the expected rainfall for the season while the west coast and the far north was drier than expected. This was largely driven by the intense storms in March.

Overall Northland had 109% of its expected rainfall for autumn, with the maximum percentage recorded at the Brynderwyn rain gauge (168%) and the Minimum at Kai Iwi Lakes (47%). 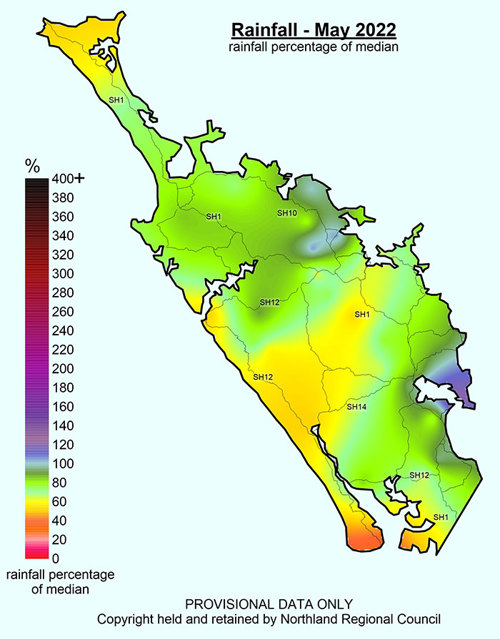 The 3-month standardised precipitation index (SPI 3) values for March – May 2022 depicts near normal – wet conditions across Northland. However, the east coast was on the wetter side while the west tended to be drier. As discussed above, autumn in Northland was driven by several thunderstorms, which averaged rainfall in the region to be “Near Normal”. The 6-month standardised precipitation index (SPI 6) shows “Near Normal” conditions from November 2021 – May 2022 for most of the region. The west coast showed “Moderately Dry” conditions; however, this is biased by one station showing “Extremely Dry” conditions due to a fault with the monitoring equipment on site.

The values for the rainfall deficit for the previous periods from the end of May are shown in the table below, with sites in the east showing no deficit on a one-month or three – month scale, while some sites in the north and west showed minor deficits. For a six to twelve-month scale, sites on the east of Northland recorded greater than expected or near average rainfall, while the more western sites recorded some deficits for the respective periods.

No data was available north of Kaitaia due to a fault at the Cape Regina station with no data recorded for the end of May. However, the rainfall maps for autumn give us a good picture that the Far North area not modelled was likely to be dry in a similar fashion to the rest of the west coast further to the south. 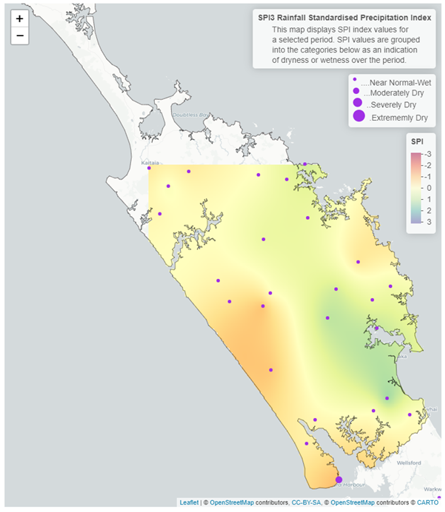 River flows varied widely across Northland in May, with sites around Kerikeri and Whangārei either recording “Normal” or “Above Normal” flows. While sites through the centre and on the west coast ranged between “Low” to “Extremely Low flows”, with drier conditions observed further to the west. The flows for May reflect the rainfall patterns observed for the month, with “Above Normal” flows recorded in areas where thunderstorm activity was concentrated.

Monthly percentile River Flows for May 2022 Groundwater levels in May remained stable and were similar to April, with majority of sites at “Above Normal” water levels. Russell was the only aquifer that had a decrease in ground water level to “Normal”.

Groundwater map for May 2022 Although showing a steady rise throughout May, Dargaville finished the month with a 30mm deficit. This correlates well to the below average rainfall recorded on the west coast throughout autumn and particularly May. Apart from Kerikeri most other stations recorded above average soil moisture, even topping the autumn season last year (2021). The Kerikeri station was about equal to the previous season.

The stations on the west coast have similar patterns to last year, and remained below average for all of autumn, however only Dargaville is still below the sites average at the start of June. The soil moisture deficit is calculated based on incoming daily rainfall (mm), outgoing daily potential evapotranspiration (mm), and a fixed available water capacity (the amount of water in the soil 'reservoir' that plants can use) of 150 mm” (NIWA). 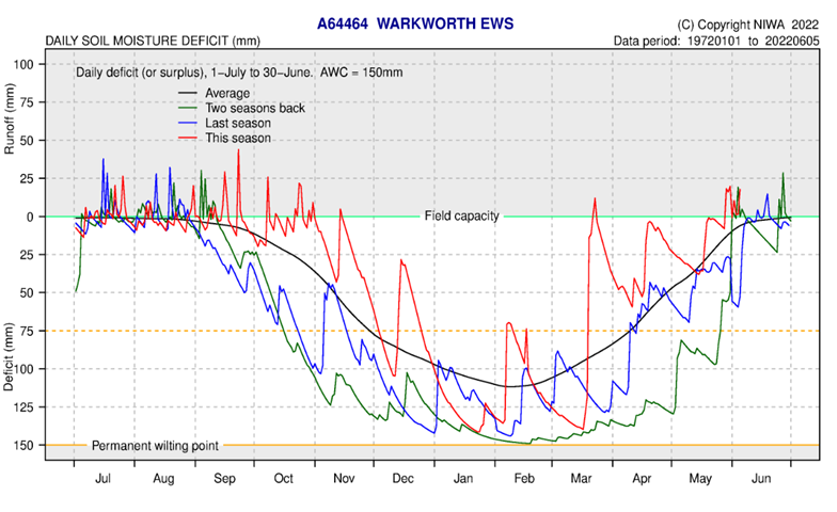