The NIWA long-range outlook for October to December 2021 calls for near normal rainfall, and a near equal likelihood of normal of below normal soil moisture and river flows, likely influenced by higher than normal temperatures and increased evapotranspiration. NIWA note that the continuation of La Nina conditions is quite likely, but it is less advanced than last year. The upshot of this is that the weather patterns we have observed over the last year are likely to continue, meaning that there is a risk of south-western areas remaining dry. The likelihood of ex tropical cyclones landing in our neck of the woods is generally increased in La Nina conditions, but we can expect to get a better outlook for this closer to summer.

September 2021 was a wet month for the region with the region overall receiving around 135% of typical rainfall. The wettest areas compared to a typical September were around the eastern hills north of Whangārei, with these areas receiving around 170% of typical rainfall. The bulk of the rainfall fell during three weather events categorised as “Severe Weather” events by MetService, on 1, 15, and 22 September. Some flooding was reported around Rangiahua SH1 during 15 September rainfall event.

The SPI maps below show that rainfall for the last 6-months has been near normal or slightly wet in comparison to normal in most locations. Over the previous 12-month period there remains some dry areas. This 12-Month SPI period is useful to assess risk to aquifers and water storage. Most notably this aligns with low groundwater levels in the Mangawhai aquifer (see groundwater section below). 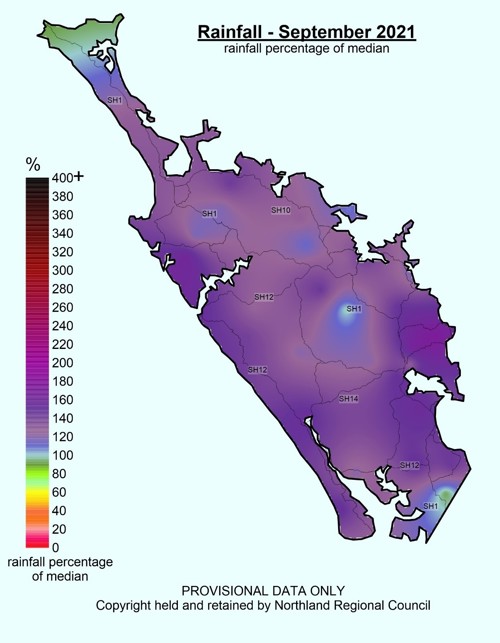 SPI Index Map 6 Months To The End Of September 2021 River flows during September 2021 were nearly universally above normal for the month compared to typical September average flow, largely driven by the frequent severe weather events that occurred during the month. The exception to this is the Kaihu River, NRC’s western most flow recorder. Rainfall in this catchment was above normal for September, but has been below normal in this western area for previous months of May, June, July and August. During September 2021 groundwater levels were normal in most locations, but classified as “Very Low” in the Mangawhai aquifer. This is due to a continuation of below normal rainfall in this area over the last 6-months. Thankfully, water levels in the Ruawai aquifer, which have previously been low also, has increased during September to “Above Normal” in response to a wet September. NIWA water balance modelling indicates soil moisture deficit is near or above normal at all NIWA climate stations and remains close to or at field capacity. “SMD is calculated based on incoming daily rainfall (mm), outgoing daily potential evapotranspiration (PET, mm), and a fixed available water capacity (the amount of water in the soil 'reservoir' that plants can use) of 150 mm” (NIWA).