April was another in a long line of dry months. Areas such as Bream Bay and very localised areas around the Bay of Islands, Tapia and Tutamoe Ranges received normal rainfall totals due to some small, isolated rainfall events. Nevertheless, most areas were quite dry, particularly Kaitaia, Aupouri Peninsula and the Parataiko/Tutamoe Ranges. The period of drier than normal weather now includes the previous 10 months and analysis of rainfall over this period gives some useful information. The NRC Precipitation Index rates areas around Kaitaia and the western hills as extremely dry and approaching that of the 2009/2010 drought.

Rivers flows remain low in response to the dry conditions, with many rivers recording flows 20-40% of typical April flows, and some as low as 0-20% of typical April flows. Most notable is the Awanui River in Kaitaia, which is currently recording low flows consistent with a 15-20 year low flow event. Low flows also persist in the Wairua catchment, with around 10-year low flows here. With a dryer than average May forecast by MetService, river flows may remain low or drop further.

There is a large soil moisture deficit in most areas but especially Kaitaia, Kaikohe and Whangārei. With large soil moisture deficits, small rain events have very little impact on river and groundwater levels, as much of the moisture is absorbed and utilised by plants and little infiltration and runoff occurs. Rainfall deficits will continue to influence river flows and groundwater until some significant rainfall is received. Rainfall for April overall less than expected for the month. There were some areas of normal or slightly above normal rainfall due to the small isolated rainfall events, particularly at the beginning of the month, but region-wide the median rainfall was 71.7mm when we would usually expect 98.8mm. Kaitaia and Aupouri Peninsula have been particularly dry during April. The NRC SPI index rates Kaitaia and parts of the western ranges as “moderately dry” for the month, but “extremely dry” in these areas and “severely dry” in many other areas when the whole period of dry conditions are analysed (previous 10 months).

Rainfall deficit values show continuing deficits in all areas except Ruawai, with Kaitaia, Kerikeri, Kaikohe and Raumanga all showing a substantial deficit over the previous 6 months and Kaitaia showing the greatest deficit over the previous year. This rainfall deficit will continue until Northland either experiences some significant rainfall events, or experience wetter than average monthly rainfall over a number of months. 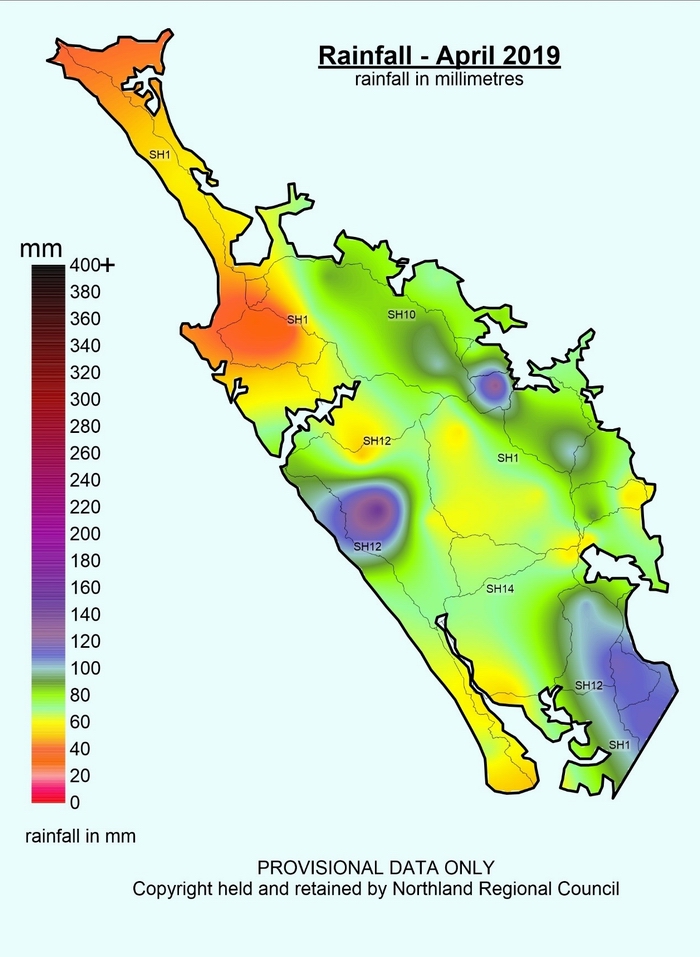 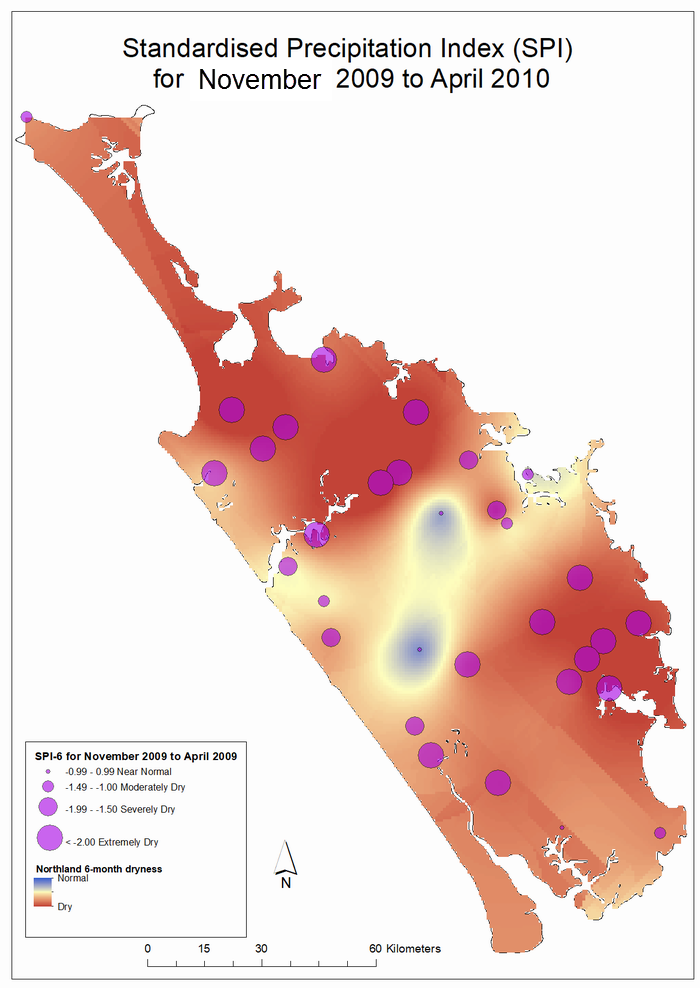 Most notably, the Awanui River in Kaitaia had flows measured at around 360l/s at the beginning of May. This is a considerably low flow, with similar flows only recorded during five other dry periods since the 1950’s. This can be considered a 15-20 year low flow event.