7.2 What are the pressures on coastal hazards?

The coastal development boom that has occurred since the 1950s has resulted in a number of coastal subdivisions with inadequate setback distances or having been developed within the ‘active' dune system. As a consequence many properties are now at risk from erosion or flooding, or are supported by erosion protection works that can adversely affect natural coastal processes.

Increasing subdivision and intensification of coastal development is increasing the risks and potential costs of coastal hazards. For example existing lots with a house are further subdivided and sold for development, reducing the options for managing coastal hazards, such as the landward relocation of dwellings that are at risk from erosion. Development of the Ahipara foreshore from 1950 (left) to 2004 (right) with inadequate setback to allow for natural variability in the position of the shoreline.

Natural systems, such as dunes and salt marsh wetlands, can play a critical role in mitigating the effects of erosion and coastal flooding hazards.

Dune systems act as a buffer between the land and the sea. Dunes erode during periods of storminess and grow seaward during calmer periods. However, the extensive modification of many of Northland's dune systems has resulted in many dunes losing this buffering capacity.

· Removal of native sand-binding vegetation (Pingao sp. and Spinifex sp.) through grazing, burning, vehicle use and other such factors.

· Structures, such as roads, sea walls and revetments, that lock up the sand reservoir of the dune system.

· Modification to estuarine margins and saltmarsh wetlands, particularly through drainage and development, increases potential for erosion and flooding hazards.

· Removal of shoreline vegetation increases potential for erosion from waves and the drainage or reclamation of saltmarsh wetland reduces the buffering capacity of these systems for flooding events, such as storm surge. 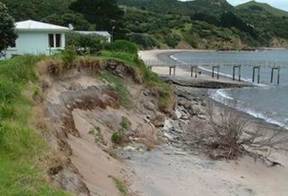 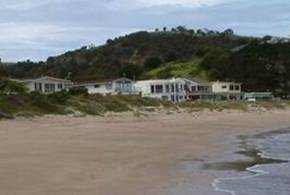 Omapere boat ramp (left), an example of a coastal structure causing increased erosion of the foreshore, and Whangaumu (Wellingtons) Bay (right) with development within the active dune complex, interrupting the natural movement of sand.

Predicted rates of sea-level rise as shown in table 2 (below) are likely to lead to increased incidences of coastal flooding, and in some cases, increased coastal erosion. Changes in climate may also increase tropical cyclone activity, with larger peak wind speeds, and increased incidence of extreme high sea levels. Extra-tropical storm tracks are also projected to move further poleward, which may have the potential to increase the frequency of damaging coastal erosion and inundation events for Northland.

Note: The above projections to the end of the 21st century exclude future rapid dynamical changes in ice flow.

Cyclicity in global climate systems can induce differing levels of pressure for Northland's east and west coast from coastal hazards, primarily in response to the El Niño Southern Oscillation (ENSO). There are two extremes to the ENSO cycle: El Niño and La Niña.

For Northland La Niña conditions increase the potential for erosion of east coast beaches, due to the setup of storm waves from onshore wind conditions. West coast beaches become vulnerable to the same type of waves during El Niño conditions. Over the past five years there has been a predominance of weak to moderate El Niño conditions. For the east coast this has resulted in predominately beach and dune system rebuilding, following the significant erosion caused by the easterly storms in 2000.