In addition to the above action, the Council, along with the district councils, investigates sites that consistently have poor water quality.

In 2008-09, the Council investigated two problem sites – Ngunguru at the toilets and Coopers Beach stream.

Contamination at Ngunguru toilets was found to come from a small stream next to the sample site. Further investigation traced the contamination back to a long-drop toilet dug too close to the water. This toilet is now closed. 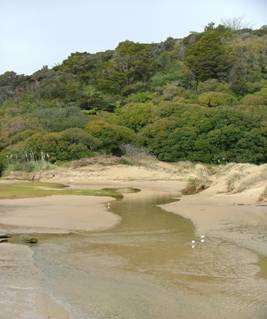 Photo: The contaminated stream in the Ngunguru estuary

An investigation of Coopers Beach stream showed that levels of E. coli bacteria were also high at two sites upstream of the sample site, including a site outside the main settlement. Samples were taken at the end of the season to identify the source of contamination (livestock, humans, wild birds, etc) however on this occasion, bacterial counts were too low to undertake an analysis. Further investigation will be carried out in 2009-10 if there still appears to be a problem at this site.