The Kaihu River originates in native forest west of Trounson Kauri Park, and drains into the Wairoa River in Dargaville. The catchment is a mix of both exotic and indigenous forestry, agriculture and horticulture, but dairy farming is the dominant land-use, especially in the middle and lower reaches. Kaihu River is one of six sites in the network that have volcanic acidic catchment geology.

The 2005-2006 results for the Kaihu River site are summarised in the table below including the median, range and percentage of sampling occasions that comply with relevant guidelines for the 12 sampling occasions. Medians shown in red are outside the recommended guidelines.

The results from 2005-2006 indicate that Kaihu River is only slightly impacted. The medians for all parameters, except E. coli and dissolved reactive phosphorus, are within the relevant guidelines. Bacterial levels are often elevated, with only four results under the recreational bathing guideline of 126 E. coli/100mL.

Over the last year spikes in bacterial, nitrogen and phosphorus results were associated with increased flow and turbidity such as on 12 October 2005. This contamination is most likely as a result of run-off from forestry and/or pastoral land uses within the catchment.

Similarly to Waipoua River, the Kaihu River site was added to the network in 2002 and therefore there is not adequate data yet to carry out long-term trend analysis on water quality in the Kaihu River. 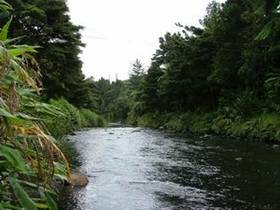