Tiny wasps that leave the mummified corpses of their victims hanging in trees as tell-tale evidence of their presence have been released by the Northland Regional Council as a biocontrol agent to deal with a sticky pest problem. 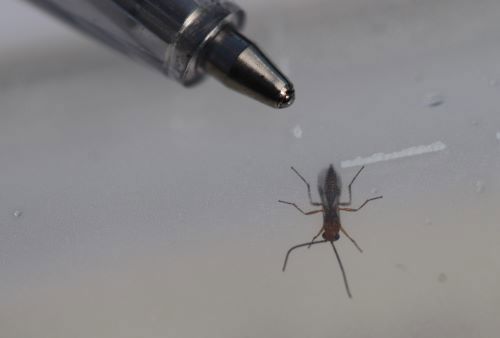 One of the released Pauesia nigrovaria wasps with a ballpoint pen nib for scale.The species the wasps have been recruited to help control, the giant willow aphid (GWA), were first sighted and reported in Auckland in late 2013 and spread quickly throughout the North Island.

Willows are GWA only recognised host plant and although just 5mm-6mm long, they’re a problem because they form dense clusters which tap into the sugar flow in a willow’s stem.

The pressure of sap through the aphid produces honey dew; a sticky nuisance for farmers and orchardists and which also attracts large numbers of German and other wasps. The willow trees themselves also suffer from the aphid infestation, experiencing branch dieback and occasionally death.

However, help for the trees is coming from an unlikely source, a tiny host-specific wasp Pauesia nigrovaria, introduced from the United States in 2017.

Crown research institute Scion is leading a three-year research programme focusing on long-term control of the aphid, including introducing the wasp.

Funding from the Ministry for Primary Industries Sustainable Food and Futures programme - www.mpi.govt.nz/funding-rural-support/sustainable-food-fibre-futures - had also made the Northland release possible.

Councillor Jack Craw, who chairs the council’s Biosecurity and Biodiversity Working Party, says the wasp lays eggs in the aphids, which hatch and consume their host, before emerging as an adult, leaving their now mummified nursery behind.

He says interestingly, the parasitoid’s presence can be confirmed by the mummified remains of large numbers of aphids which remain fixed to willow stems for weeks or even months after the wasps have emerged. Tiny parasitic wasps are released into willows by regional council nursery coordinator Matthew Mabbitt at the NRC’s Mata poplar and willow nursery near Whangarei.The regional council recently (Thursday, 22 April) released 30 mated females of the little wasps at its Flyger Rd, Mata, poplar and willow nursery where it’s hoped they will establish and then eventually spread from.

Councillor Craw says the wasps join a variety of biocontrols already in Northland, all of which have been rigorously tested for host-specificity to ensure they won’t attack other, non-target species.

Northland’s biocontrol agents which include beetles which feed on tradescantia (formerly known as wandering Jew). There are also fungi and rusts which collectively attack a variety of pest plants and insects including tropical grass webworm, mistflower, gorse, ragwort and woolly nightshade.

People interested to learn more about the regional council’s biocontrol programme and its other work in pest control should visit www.nrc.govt.nz/nasties The target pest; giant willow aphids which feed on willows in large numbers producing a sticky honey dew. The insects can damage – or even kill – infested trees.