3.2 What are the pressures affecting air quality

The air, like any other natural resource, can be adversely affected by pollutants. Pollutants are substances that, under certain conditions, can harm human, animal or plant life. Polluted air can also interfere with the use and enjoyment of life and property by affecting visibility, causing odour, dust or smoke problems or corroding and disfiguring materials.

Pollutants of concern – such as oxides of nitrogen, reactive organic compounds, particles, lead, carbon monoxide and sulphur dioxide – are released into the atmosphere from a range of human and natural sources. Important sources of these pollutants include motor vehicles, industrial activities and some domestic and commercial activities. Once in the atmosphere some pollutants can then be transported throughout the region by wind and air currents. 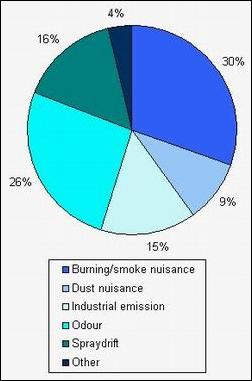 Since November 1993 the Regional Council has operated a system for receiving, investigating and reporting on environmental incidents 24 hours a day, seven days a week.

Since 1993, the Council has responded to more than 11,500 incidents. These range from minor land disturbance through to major oil spills. Approximately 40% of these incidents are air- related incidents (4700). In any given year, air incidents comprise between one third and one half of all incidents received by the Council.

The majority of air-related incidents fall into five categories: Burning or smoke nuisance, agrichemical spraydrift, odour, industrial emissions and dust nuisance as shown in the figure 1 (right). Other incidents include, for example, abrasive blasting, natural phenomena and hazardous substances.

More than 450 air-related incidents were reported to the Council in 2005 and 2006 compared with more than 400 in 2003 and 2004, as shown in figure 2 (below). The overall trend of increasing numbers of air-related incidents is consistent with similar findings in other parts of New Zealand (NZ) and overseas and seems to reflect an increasing intolerance of poor air quality. Figure 2: Number of air-related incidents reported to the Regional Council from 1994 to 2006.

While a single well-tuned and operated motor vehicle is unlikely to have a significant effect on air quality, collectively large numbers of motor vehicles do reduce air quality, particularly in urban areas. Monitoring both in NZ and overseas has demonstrated that vehicles emit carbon monoxide, inhaleable particulate, oxides of nitrogen, sulphur dioxide, ozone and benzene.

Although new vehicles are more fuel efficient and emit less pollution per kilometre travelled than older vehicles, this is offset by the increasing numbers of vehicles on our roads, the relatively old age of the NZ vehicle fleet (average vehicle is 12 years old - MFE 2006) and the lack of emission control checks on vehicle emissions.

In Whangarei City, historical monitoring has identified that the levels of carbon monoxide sourced from motor vehicles in Bank Street occasionally exceeds both the relevant National Environmental Standard (MFE 2004) and ambient air quality guideline (MFE 2002) for this contaminant. These levels are set to ensure the protection of human health.

In relation to inhaleable particulate or PM10, the NRC has identified that vehicle transport contributes up to 50% of PM10 in urban areas and up to 20% in residential areas (Hally and Stevenson 2002).

Traditionally, many homes have used open fires for warmth during the winter. Individually these fires are unlikely to cause significant air pollution but collectively they reduce the air quality to the point where it can exceed relevant National Environmental Standards for inhaleable particulate (PM10).

From 1 October 2005 all new domestic fires in urban areas have had to meet the national emission standard. This standard has been introduced to reduce the amount of smoke pollution caused by domestic fires. New burners use up to 30% less wood to produce the same amount of heat and up to 90% less smoke (Department of Energy 2006). Smoke from domestic fires hangs over Whangarei City during the winter.

In Whangarei City, the NRC has identified that wood fires contribute up to 50% of air pollution in urban areas and up to 70% in residential areas (Hally and Stevenson 2002). Although older burners – including open fires – are gradually being replaced by more modern burners, heat pumps or gas fires, increasing development in and around Whangarei City means the number of wood fires is increasing. 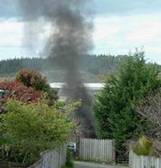 Disposing of refuse by burning it in the backyard is no longer considered acceptable in urban areas. The close proximity of neighbouring properties means that smoke and odours from rubbish fires frequently impact on adjoining residents.

For elderly residents, very young children or people with pre-existing medical conditions such as asthma, respiratory or heart conditions the inhalation of smoke can have serious potential effects on their health – aside from the unpleasant, acrid smoke and fumes that result from the backyard burning of waste.

The number of burning and smoke nuisance incidents has increased rapidly in recent years reaching 240 complaints in 2006 as shown in figure 3 (below). Most occurred in the Whangarei area and followed the decision of the Whangarei District Council to charge for all rubbish disposal, including vegetation but excluding recyclable materials such as paper, plastic, cardboard and glass.

At 1 January 2007 there were about 310 resource consents for discharges to air being monitored by the Northland Regional Council. Many of these consents are for small-scale sewage treatment and disposal facilities, which need appropriate controls placed on air emissions to prevent odour problems. Figure 4: Map showing the location of all air discharge consents in Northland at 1 January 2007.