During 17 to 19 September 2005 a moderately intense low-pressure weather system (pressure at Dargaville was recorded at 983 hPa, where mean pressure is 1014 hPa), with mean peak winds and maximum gusts of 48 km/hr and 105 km/hr respectively, coincided with large perigean-spring tides (predicted to be 3.9 metres at Port Taranaki, where MHWS is 3.5 metres). The combination of low pressure, as shown in figure 8 (above) and wind caused a moderate storm surge, which resulted in areas of localised coastal inundation. Offshore significant wave heights (the mean height of the largest third of wave heights) in excess of seven metres, as shown in figure 9 (below), were associated with the event and these caused substantial erosion of the foreshore on a number of west coast beaches. 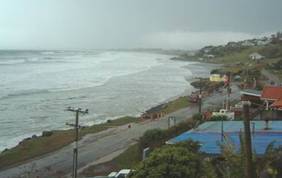 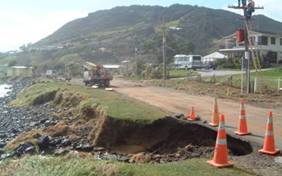 Figure 9: Tide and offshore wave conditions modelled for the event, at the entrance to the Hokianga Harbour (Data courtesy of NIWA).

Substantial erosion occurred to the Ahipara foreshore north of the Wairoa Stream, of between five to 10 metres. Localised coastal inundation also caused temporary flooding of the road and low-lying properties.

Substantial erosion also affected the Omapere foreshore, with differential erosion of between one to four metres. At least one dwelling was put at direct risk of failure from this event, with the concrete foundation overhanging the edge of the erosion scarp. 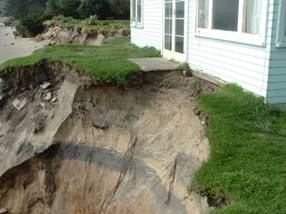 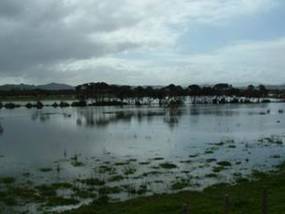 So what is the Council doing about it?

Following the storm several meetings were organised with local communities to discuss the erosion and potential management options.

A public meeting, organised by the NRC, was held in Omapere on 25 October 2005 to discuss the erosion of the Omapere foreshore and management options. The meeting was well attended by a representative cross-section of 80 people from the local community. A presentation outlining what we know about the Omapere Beach system, examples of management options, an explanation of rules and regulations was given and attendees were invited to discuss ‘where to from here' with management of the beach. The community voiced a number of differing opinions as to what management actions should be implemented.

From this meeting a society, comprised mostly of local community members, was set up by the community to consider options for managing the erosion of the foreshore. The society has continued to meet on a regular basis, with support from the NRC, and is currently in the position of investigating the most appropriate short-term and long-term management options for the foreshore. Data is being collected from within the harbour to determine the best solution to manage the coastal erosion.

A similar meeting, although on a smaller scale, was held at Ahipara on 18 October 2005 to discuss management options for those properties affected by erosion near the Wairoa Stream. The meeting was well attended by the affected beachfront property owners. The outcome from the meeting was that the affected beachfront community wished to implement a ‘low impact' solution to the erosion, with also some consideration to the reconstruction of a groyne to train the stream. The NRC has continued to liaise with a number of the affected property owners over the management of the foreshore in this area, with management options currently being discussed.