· PM10 is measured at two sites in Whāngārei and one in Kaitāia.

· SO2 is measured in central Whāngārei and at Taurikura.

· CO is measured in central Whāngārei.

· None of the results exceeded NES for air quality.

Particulate matter (PM10) is a collective term used to describe very small solid or liquid particles in the air, such as dust, fumes, smoke and fog. PM10 comes from both natural – wind blown dust, forest fires or pollen – and manmade sources including automobile exhausts, solid fuel burning and industrial emissions. Wood burning fires used for home heating are the main source of PM10 in Whāngārei.

Smoke has high levels of PM10, which is easily inhaled and can harm people's health. People most susceptible to the effects of inhaling PM10 include the elderly, those with existing lung problems, weak hearts or infections such as pneumonia, and children.

PM10 was sampled at three locations in Northland during 2010-2011; Water Street and Robert Street in central Whāngārei, and North Road in Kaitāia. The results collected were compared to the National Environmental Standard (NES) for PM10, which states that PM10 shall not exceed the limit of 50 micrograms per cubic metre more than once in a twelve month period.

Monitoring results from 2010-2011 show PM10 levels were slightly elevated over the winter months due to cool, calm conditions that allowed air pollution from domestic fires to build up. Despite this, PM10 levels were 100 percent compliant with the National Environment Standard (NES) at both Water Street and Robert Street. PM10 monitoring in the Kaitāia airshed began in July 2010 at North Road. Like the Whāngārei airshed, Kaitāia experienced slightly elevated levels of PM10 over the winter months but levels were still well within recommended guidelines with 100 percent compliance with the NES.

If the Kaitāia airshed continues to meet the guidelines the monitoring equipment may be moved to investigate PM10 levels at another site. Sulphur dioxide (SO2) is a colourless gas that has a strong smell. It is mainly produced by the burning of fossil fuels containing sulphur however it can also be produced by some industrial processes.

SO2 is harmful when inhaled at high concentrations and acts directly on the upper airways (nose, throat and lungs) producing a response within minutes. It is particularly harmful to people with existing respiratory problems, such as asthmatics or people suffering from lung disease. The symptoms of SO2 inhalation include wheezing, chest tightness, shortness of breath and coughing.

Results from SO2 monitoring

In Northland, the most significant industrial source of SO2 is the New Zealand Refining Company, located at Marsden Point. The prevailing wind in this area frequently blows emissions from the refinery towards the Whāngārei Heads, a largely rural, residential area. The council monitors ambient SO2 concentration using a continuous monitor stationed at Taurikura Bay.

In 2010-2011, results from the monitoring station at Ody Road indicated SO2 concentrations were 100 percent compliant with both the NES of 350 micrograms per cubic metre (µg/m3) over a one hour average, and also well below the current 24-hour ambient air quality standard of 120µg/m3.

The council also began monitoring SO2 at Robert Street, Whāngārei from July 2010 but the record is incomplete due to instrument failure. However, results obtained until the end of 2010 were well below the NES. A new SO2 monitor will be deployed at this site soon.

In July 2010 the council started carbon monoxide (CO) monitoring at Robert Street in Whāngārei. CO is a colourless and odourless, yet highly toxic gas produced by the incomplete combustion of carbon-based fuel. Motor vehicle exhaust is believed to be the main source of CO in the Whāngārei airshed with minor contributions from industrial and domestic emissions.

CO concentrations for 2010-2011 at Robert Street were well within the National Environmental Standard of 10 mg/m3 eight hour running averages.

You can help reduce the amount of air pollution in our region by:

· Cleaning your chimney at least once a year;

· Avoid burning rubbish and vegetation in your backyard; and

· Compost vegetation and recycle other materials.

To find out more go to:
www.nrc.govt.nz/backyardburning

Or for more information on the Regional Air Quality Plan go to:
www.nrc.govt.nz/raqp 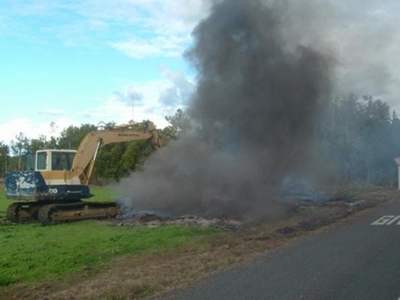 Rural burning can cause smoke nuisance and dust deposits in neighbouring properties.