In 2009-2010, six freshwater sites were safe for swimming 100% of the time. Two sites were safe on all but one sampling occasion and four were safe on all but two sampling occasions. Overall, more freshwater sites had a compliance rate of 100% in 2009-2010 compared to 2008-2009. This may be attributable to lower rainfall over the summer this year, which in turn reduced the amount of contamination entering freshwater systems from rainfall run-off. 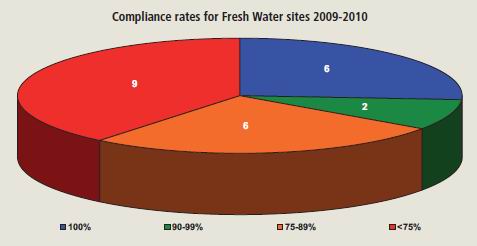 In addition to sampling for swimming water quality, 15 sites were also graded for their suitability for recreational shellfish gathering. Only two sites, Oakura and Mcleod Bay, complied with the microbiological water quality guidelines during the summer months.