Sediment is the major contaminant of rivers, estuaries, harbours and inshore waters in Northland. It affects land productivity, water quality, ecological health and flooding throughout the region. The Council has a soil conservation initiative which is closely aligned to the Priority Rivers Project and the Council's work on water quality.

Priority catchments – 27 of them – have been assessed and areas of erosion (both current and potential) identified. Maps of each catchment have been produced to show where the erosion sites are.

The information enables areas to be targeted for soil conservation initiatives, including planting native trees, poplars and willows, preparing farm plans and encouraging land use changes of marginal pasture land. Photo: An example of a type of erosion targeted by the Soil Conservation Project

· It reduces water quality and carries other contaminants, such as illness-causing bacteria and nutrients.

· It reduces the value of water bodies for activities such as gathering kaimoana and swimming.

· It is very costly to remove sediment to make water suitable for drinking.

· It is costly to remove from water bodies.

The 2009-2010 season has been as successful as ever, with many outstanding projects completed.

Number of projects by District and percent of total projects completed.

Note: Some projects received funding through more than one funding stream. 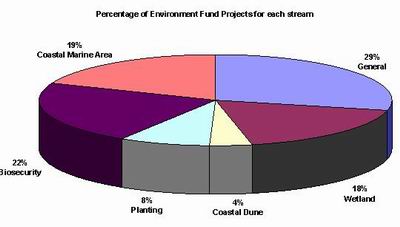 In 2009/10 the Environment Fund was revised to align with regional land management priorities which will make the fund more efficient, targeting resources towards improved land management outcomes. The new funding streams are: