During 2009-2010, the Council biosecurity team responded to 959 enquiries in relation to pest management.

· Pest animals – including possums, mustelids, cats, rats and goats; and

· Maritime invaders – such as sea squirt. 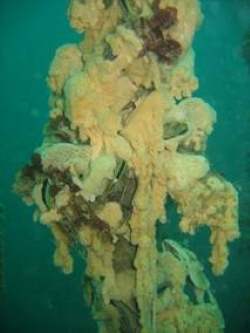 This plant is a major invader of wetlands, river margins and poorly drained pasture and has been recognised as a pest plant of national importance. A collaborative approach between the Northland Regional Council and Ministry of Agriculture and Forestry Biosecurity New Zealand (MAFBNZ) has been agreed to ensure its containment within the Northland region.

Manchurian wild rice is widespread in the Kaipara district and covers approximately 500 hectares with the main infestation found next to the Northern Wairoa River and its tributaries. There are more than 300 outlier sites – sites that are not connected to the main infestation – which are currently being targeted by the programme.

Infested sites require repeated spraying however eradication of the plant can be achieved providing a programme of sustained control is maintained. When sites are visited the status of the plant on that site is graded against a six-point scale; mature dense stands rate a six on the scale, juvenile scattered plants three, and zero represents a bare site with no plants visible. 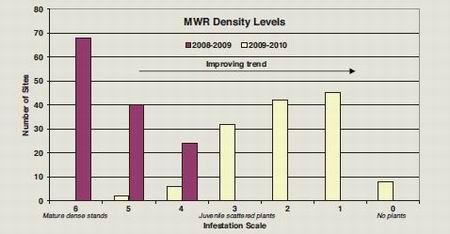 Sites which have now received at least three repeated sprays have shown a dramatic decline in the number of mature plants and percentage ground cover. There are a growing number of sites where the plant's status can be recorded as scattered juvenile plants or nothing at all. Monitoring carried out in March 2010 showed that most of the egeria and approximately 50% of the hornwort have already been removed by the grass carp.

In June 2010, grass carp were released into Lake Heather, north of Kaitāia. This high value dune lake is also infested with hornwort and egeria and grass carp are expected to have an impact on these weeds over the coming summer months. Fish will be removed from the lakes once the pest plants have been eradicated, which is predicted to take up to five years.

Community projects to control and manage Argentine ants have proven very successful and surveys of existing Argentine ant control areas were undertaken during 2009-2010. A survey of the Mangaiti Beach CPCA indicated that the overall infestation is controlled with some small residual populations surviving poisoning. A survey of Skudders Beach CPCA indicated the same results.

Few people realise it but Northland is a battleground for a largely unseen war between a host of tiny insects and fungi and some of the region's worst weeds. In the last five years alone, more than 50 releases of different ‘biocontrol' agents have occurred in Northland to help control weeds such as Californian, nodding and Scotch thistles, alligator weed, broom, gorse, mistflower and ragwort.

Before bio agents can be released into New Zealand, there is a rigorous process of trial and experimentation overseen by the Environmental Risk Management Agency (ERMA). Imports are strictly controlled and scientists can take several years to satisfy the risk assessment criteria and complete trial work. This is to ensure that the bio agents don't pose a risk to New Zealand's native plants or animals.

In 2009/2010 considerable progress has been made in establishing nursery sites for biocontrol agents, releasing and identifying new agents and nurturing existing agents in Northland.

The Irish parasitoid of the clover root weevil is finally established in Northland. The wasp has survived and bred from a release of 700 parasitised weevils in December 2007 at Taupo Bay. In May 2009, 88% of the weevils collected at Taupo Bay had been parasitised by the wasp. It is expected that this site will serve as a source of parasitised weevils to be redistributed around Northland.

A number of new biocontrol agents have also been released in Northland in 2009/2010. The Portuguese strain of gorse thrips has been successfully introduced to the Far North from a population in south Taranaki. It is hoped that this strain will be more suited to the Northland climate than the Cornish strain of gorse thrips which has a restricted distribution at Uretiti, Ruakaka.

A trial release of the pirate bug, Orius vicinus, collected from Otago, has been made in the Far North. This is a generalist predator of thrips, aphids and mites. A ladybird, Serangium maculigerum, recently discovered in Auckland has been moved to Kerikeri to combat the citrus whitefly, a relatively new pest affecting the citrus industry.

A novel approach for the control of the guava moth (AKA the fruit-driller moth) is being-trialled in two environments – urban habitat in the Far North and at a commercial macadamia orchard in Kerikeri.

Initial results indicate that mating disruption using the Asian peach moth pheromone, is reducing damage to macadamia nuts by guava moth by up to 50%. However, it is not as effective in the home garden due to a number of conflicting factors.

Community projects which target multiple pest species are increasingly popular and Regional Council staff have now helped set up 30 community plans – five in the last year – involving around 620 people, and 23,000 hectares of land. Community plans are used to help support the protection of kiwi and other endangered fauna as well as deliver weed control.