Particulate matter (PM10) is a collective term used to describe very small solid or liquid particles in the air, such as dust, fumes, smoke and fog.

Smoke has high levels of PM10, which is easily inhaled and can harm people's health. People most susceptible to the effects of inhaling PM10 include the elderly, those with existing lung problems, weak hearts or infections such as pneumonia, and children.

PM10 was sampled at two locations in Northland during 2009-2010; Water Street and Robert Street in central Whāngārei. The results collected are compared to the National Environmental Standard (NES) for PM10, which is not exceeding the limit of 50 micrograms per cubic metre more than once in a twelve month period.

Monitoring results from 2009-2010 for Water Street indicated that ambient PM10 concentration exceeded the NES on 25 September 2009. This was due to pollution from the Australian dust storm that engulfed Sydney and Brisbane on 23 September 2009. Other than this occasion PM10 levels were slightly higher a number of times over the winter months due to cool, calm conditions that allowed air pollution from domestic fires to build up. This can be seen in the graph below. 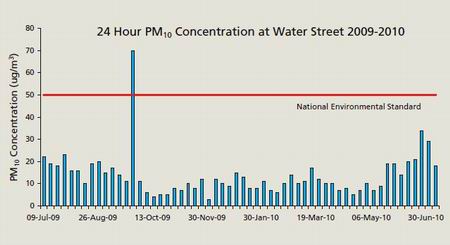 Monitoring results from 2009-2010 for Robert Street, Whāngārei also showed similar trends with Water Street results even though these results were obtained using completely different instruments. PM10 concentration on 25 September 2009 was recorded at 94 µg/m3 due to the Australian dust storms. The second highest value recorded was 50 µg/m3 on 17 June 2010 and was most likely due to smoke from home heating fires on a very cold, calm and clear day. Results from Robert Street are presented below.