Northland's estuaries are important economic, social and cultural assets, as well as being an important part of our coastal environment. Because estuaries and harbours are located at the end of the freshwater drainage system, they are affected by activities that occur in the rivers and streams that feed into them (their ‘catchment').

Sediments and contaminants carried in freshwater tend to be deposited in our estuaries as when freshwater meets saltwater, it causes fine silts and clays to settle to the bottom, often with contaminants, such as bacteria, attached to them. These deposits can impact the health of the estuarine environment and can make a site unsuitable for activities such as kaimoana gathering and swimming. 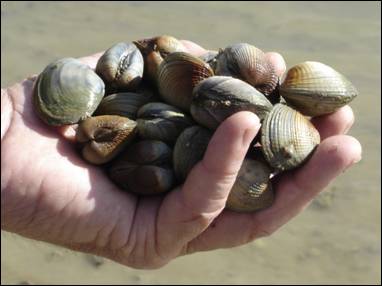 Photo: Cockles are a popular shellfish and one of the species that can be affected by contaminants

Many of Northland's estuaries have been changed or impacted by human activity. Vegetation clearance and development has increased sediment, and land-use activities have increased the amount of nutrients and metals in rivers and streams, which eventually enters our estuaries. In addition, significant areas of saltmarsh and mangrove forest in our estuaries, which can act as natural filters to sediment and contaminants, have been drained for agriculture, development and infrastructure.

The Council monitors and protects Northland's coastal environment, including estuaries and harbours, through the Regional Policy Statement for Northland and regional plans. The Council also runs an Estuarine Monitoring Programme (EMP) to help assess the health of our estuaries and monitor change over time. This programme also aims to identify the impact of human activities on these systems, assess the effectiveness of rules contained in the regional plans and promote awareness of environmental issues which impact estuarine health.