Since 2004, 82 Northland lakes and dams have been surveyed by NIWA. Information collected for each lake includes records of indigenous and introduced plant and fish species, and water quality observations. Each lake is given an ecological ranking and recommendations are made for future monitoring and, where appropriate, management, to help preserve, protect and enhance the ecological values of the water body. Results from 2007-08 show that over a third of lakes surveyed can be ranked as outstanding. These lakes generally contain endangered plants or animals and have good water quality. Lakes Ngatu, Taharoa and Humuhumu all fall into this category as they contain the nationally threatened Hydatella inconspicua and contain diverse emergent and submerged plant communities.

At the lower end of scale, results from 2007-08 show that over a third of all lakes and dams surveyed are ranked as "low". These lakes are generally highly impacted by land use activity and have low water quality, or are heavily impacted by pest plants and have low faunal diversity, for example, Lakes Waimimiha, Omapere and Parawanui. Most of these lakes also contain pest fish such as mosquito fish (Gambusia affinis) and rudd (Scardinius erythrophthalmus).

The graph below gives a breakdown of the ecological rankings for the 82 lakes surveyed in 2007-08. 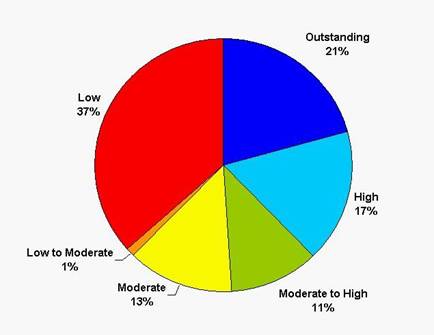 In April 2008, NIWA resurveyed 8 high priority lakes for new introductions of pest plants. No new invasions of oxygen weed were found at any of the eight lakes surveyed, however, bladderwort (Utricularia gibba) was recorded for the first time at the Kai Iwi lakes. Unfortunately little can be done to prevent the spread of bladderwort as waterfowl are the most likely cause of dispersal.

Lake Swan (Pouto Peninsula) was also surveyed to assess the extent of hornwort (Ceratophyllum demersum) and Egeria (Egeria densa) growth in the lake. As this is the only site in Pouto that contains hornwort, eradicating it from this site will reduce the risk of spread to other pristine water bodies in Pouto. An application to introduce grass carp, which feed on this pest plant, into Lake Swan is currently being completed. This method of control has been successful in other lakes, including Lake Omapere.